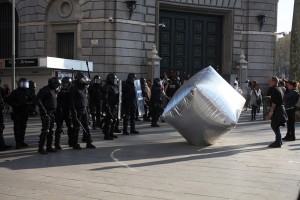 The New York Times has published an interactive A History Of New York In 50 Objects that they modeled on the BBC’s famous A History of The World in 100 Objects.

Teachers can use them as a model for students — why not have them create their own histories of the U.S., their native countries, or even their families in 10 or so “objects”?

Today, The New York Times has published a column on this phenomena and headlined it Object Lessons in History.

It mentions an intriguing new exhibit using this strategy appearing at the Victoria and Albert Museum called “Disobedient Objects”:

From Suffragette teapots to protest robots, this exhibition is the first to examine the powerful role of objects in movements for social change. It demonstrates how political activism drives a wealth of design ingenuity and collective creativity that defy standard definitions of art and design.

The museum has some unusual teacher resources for the exhibit.

Here are a couple of newspaper articles, with photos, on it:

‘Disobedient objects’ chart history of protest at V&A is from the BBC.

Art and Design of Protest Movements in Disobedient Objects, Victoria & Albert Museum is from The Huffington Post.

Personal Reflections On My 2020 Professional Experiences