The Best Posts & Articles On How To Teach “Controversial” Topics – Suggest More! 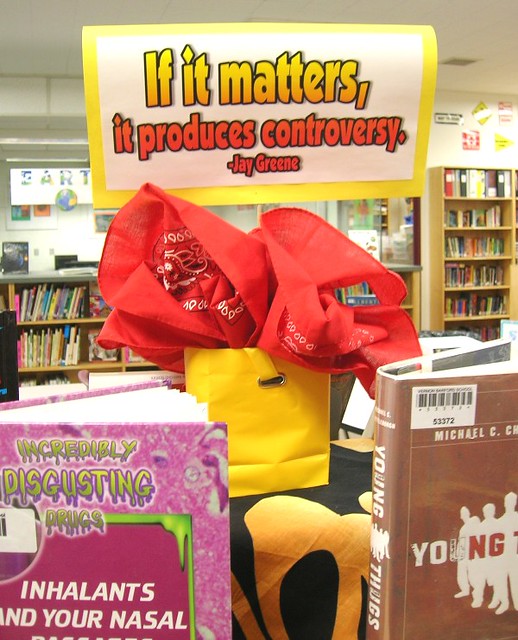 Check out my five-part Education Week Teacher series on handling controversial topics in the classroom!

There is no shortage of topics that need to be discussed in the classroom that many consider “controversial” (see A Collection Of Useful Posts, Articles & Videos On Race & Racism – Help Me Find More) and there is no shortage of people who don’t want many of these issues brought up in schools (see The Best Posts & Articles On The Teacher & Student Protests In Colorado).

Here are a few resources with additional suggestions on how teachers might effectively engage students on these kinds of important topics, and I hope readers will suggest more:

Wondering How To Handle A Controversial Topic In Class? What We Did This Week Worked Out Very Well is a post I wrote last month.

How to Teach Beyond Ferguson is by Jose Vilson and appeared in Edutopia.

Engaging With Class & Race In The Classroom is one of my Ed Week posts.

Teachers take on controversial subjects: Ferguson, same-sex marriage, immigration is from The Washington Post. It makes a number of good points, but one teacher (Kelly) who is interviewed is not one who I would suggest people emulate.

Educate to Liberate: Build an Anti-Racist Classroom is a post at Edutopia.

Free ebook – PARSNIPs in ELT: Stepping out of the Comfort Zone (vol. 1) is a by Adam Simpson for teachers of ELLs. What does PARSNIPs stands for?

This is the lovely acronym for Politics, Alcohol, Religion, Sex, Narcotics, -Isms, and Pork. These are the DMZ of the ELT world, the no-go zones where coursebook publishers fear to tread (in case they lose customers)

Politics In The Classroom: How Much Is Too Much? is from NPR.

Parsnips in ELT: Stepping out of the comfort zone (Vol. 2) is a new free eBook by Adam Simpson and others.

Six Guidelines for Teaching About Religion is from Education Week.

Civil Discourse in the Classroom is from Teaching Tolerance.

Teaching Evolution Isn’t About Changing Beliefs is from Ed Week.

Hot Summer Thinking: Politics in the Classroom is from Ed Week.

Teaching Religion in the Classroom Just Got More Political is from Ed Week.

Six Ways to Talk with Students about Politics is from Middleweb.

Talking Across Divides: 10 Ways to Encourage Civil Classroom Conversation On Difficult Issues is from The New York Times Learning Network.

Dana Goldstein writes in Slate about how teachers should respond to the “Trump Effect.”

Do Teachers Remain Neutral or Share their Beliefs with Students? is by Rick Wormeli.

The Washington Post published a column I wrote, ‘Dear President-elect Trump’: Immigrant students write letters asking for ‘the opportunity to demonstrate we are good people.’

From Brexit to Trump: should teachers talk politics in the classroom? is from The Guardian.

Teaching in the Trump Years (Part 1) is by Larry Cuban.

New tools to help educators and support students in controversial scenarios is from Usable Knowledge.

Four Ideas for Approaching Political Conversations With Students is from Ed Week.

Sure, You Hate Trump, But Can You Tell Your Students That? is by Tom Rademacher.

How Teachers Are Addressing the ‘Take the Knee’ Controversy in Class is from Ed Week.  You might also be interested in The Best Resources For Teaching & Learning About The National Anthem Protests.

Inviting Controversy Into Our Classrooms appeared in Cult of Pedagogy.

If You Were Going To Begin A PD Discussion On How To Discuss (& How Not To Discuss) Controversial Issues, You’d Want To Begin With This Video

7 ways to teach civil discourse to students is from The Conversation.

Students Learn to Put the ‘Civil’ in Civil Discourse is from Ed Week.

Why “Both Sides” of a Story Aren’t Enough is from Teaching Tolerance.

How to Map a Controversy appears at ASCD.

Learning How to Teach Controversial Topics is by Sarah Cooper.

Your Roadmap for Teaching Controversial Issues is from iCivics. It’s free, but you have to quickly register in order to download the materials.

Especially during this election season, educators may be dealing with polarized classrooms. These tips from our updated “Let’s Talk” guide can help mitigate this concern and create respectful classroom discussion norms on critical topics.https://t.co/zHyvGmGdnn pic.twitter.com/HsaAIbEso0

Fair and Factual: How to Navigate Important Political Discussions with Students is from MindShift.

Being a Teacher Means Talking About Sensitive Social Issues. Here’s How is from Ed Week.

Teaching Students How—and When—to Change Their Minds is from Edutopia.

Productive Classroom Debates on Sensitive Topics is from Edutopia.

Teaching in an Era of Polarization is from NEA News.

Why controversial issues must still be taught in U.S. classrooms is from Ed Source.

5 Ways to Teach Climate Change and COVID-19 During Polarized Times is from Ed Week.

WORKING THROUGH POLITICAL DIFFERENCES THROUGH CONFLICT, NOT KUMBAYA

So Your Student Believes the Earth Is Flat is from Usable Knowledge.

Teaching controversial issues when democracy is under attack is from Brookings.

USEFUL RESOURCES FOR TEACHING ABOUT THE REPEAL OF ROE

4 Principles to Help Educators Teach Politically Charged Topics is from The 74.

Educating about Elections in a Partisan Age is from the National Council for the Social Studies.

Discussing Politics in Classrooms Is an Opportunity for Growth, Not Division is from Ed Surge.

The Best Resources For Writing In Science Class