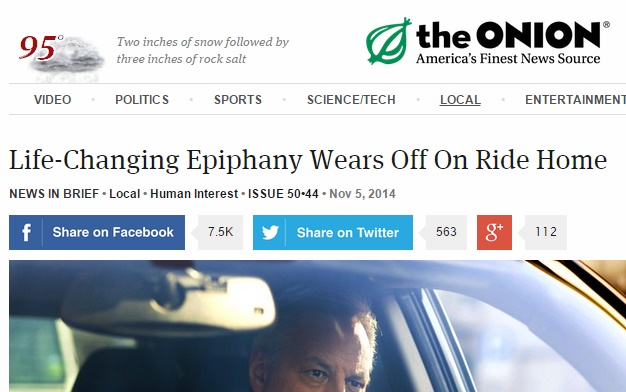 Many people who claim they want to make social change often have a  misunderstanding of community organizing and power. During my nineteen-year organizing career, we helped people see the difference between a “Movement” and a “Broad-Based Community Organization.”

A Movement tends (not always, of course) to have the following characteristics: a charismatic leader or two or three, few longstanding face-to-face relationships among large numbers of people, few plans — if any — for leadership development, a lack of  understanding  that there are no permanent enemies or allies in public life, and a lack of recognition that the whole focus of our efforts should be to get into negotiations to reach a compromise (as long as it was “half a loaf” and not “half a baby”), and little accountability or discipline.

A broad-based community organization would basically be the opposite of that description.

Today, The Onion published a great story that exemplifies one of  the drawbacks of Movements. It’s titled Life-Changing Epiphany Wears Off On Ride Home.

Despite being overcome by a profound realization just minutes earlier that challenged his long-held beliefs and promised to forever alter his daily existence, sources confirmed that 42-year-old Thomas Wilson’s epiphany had fully worn off during his drive home Wednesday.

It points out what often happens to people outside of a broad-based organization for change — inspiration that often disappears without discipline, accountability and relationships.

And it also points out why those of us interested in change in the education arena should consider placing our emphasis on working with our unions instead of with other groups.