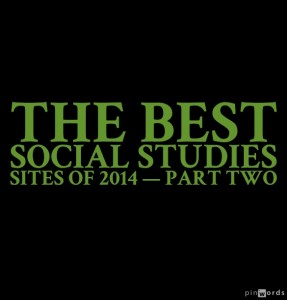 Here are my choices for The Best Social Studies Sites Of 2014 — Part Two:

Hstry is a nice new online tool for creating timelines. Richard Byrne just wrote a post about it, and I’d suggest just you visit his blog to learn more. As he points out, one of the particularly nice features of this free tool is that teachers can create virtual classrooms for their students.

If you teach Social Studies and don’t know who Ken Halla is, you should. His blogs on each Social Studies subject are immensely helpful and he has a book coming out in January, Deeper Learning Through Technology: Using the Cloud to Individualize Instruction. Plus, he has a neat site called ContextU, which Richard Byrne explains well in this post and which is the reason I’m talking about him on this “Best” list.

The 10 greatest changes of the past 1,000 years is an excellent article in The Guardian. In it, a historian describes shares his opinion of the greatest change that occurred in each of the last ten centuries. It’s a fascinating article, I think, for anyone to read. The real reason I’m posting about it, though, is because I’ll be using the idea in my World History class for English Language Learners. We’re just finishing up a unit on the “First Civilizations,” and I think I’ll ask them to identify what they think is the greatest change that happened during that period and why they chose it. If it goes well, I might make it a regular assignment at the end of each unit.

HeatMap News shows spots on a world map where most news reports are coming from at any given moment (based on Google News). Click on the spot, and you’re then shown article summaries, images and links.

Type any zip code into Esri’s Zip Lookup and you’ll get an excellent and accessible data image of that community based on U.S. Census Data and additional sources.

Vox  published an extraordinarily thorough and well-written description of legendary community organizer Saul Alinsky and his influence today. Regular readers might remember that I spent the last fifteen years of my nineteen-year community organizing career working for the Industrial Areas Foundation, the organization that Alinsky founded.

Thanks to Richard Byrne and to InterCom, I learned about a new and revised version of a neat site called Fasten Seat Belts. It shares a series of short and light videos about cultural norms in different countries. They’re framed as “Dos & Don’ts.”

The Oxford Poverty and Human Development Initiative has developed a method for measuring poverty that takes into account a number of factors, including health, education, and living standards. This Multidimensional Poverty Index (MPI) is made up of ten indicators, divided into these three main dimensions of poverty.

Teaching Tolerance, the organization justifiably well-known for developing very good social-justice oriented teaching resources, has unveiled: “Perspectives for a Diverse America… a literacy-based curriculum that marries anti-bias social justice content with the rigor of the Common Core State Standards.” It’s a very ambitious site, and I think most teachers will find the highlight to be 300 great texts, often from larger works, all set-up to print out and copy for students. Those are a gold mine! I hate to say it, but I generally found the site’s set-up to be fairly convoluted and confusing to navigate, though others may very well feel differently. But, whether you agree with me or not on that, I’m sure you’re going to agree that the texts are a wonderful resource.  Because of the available texts, this is the only site on this year’s list that I’m adding to The “All-Time” Best Social Studies Sites.

The British newspaper The Guardian publishes a neat series of video “animations and explainers” that you can find on their YouTube channel.

Show.me, the popular site that collects interactives from museums throughout the United Kingdom, has just unveiled a brand-new (and sorely needed) redesign. It looks great!

The History Project is led by educators in Pakistan and India who have developed a website and textbook that show each country’s interpretation of their histories — side by side! You can see an image above (reduced in size) from their site. Not only is a phenomenal resources for students in those two countries, it’s an extraordinary one for teachers everywhere. You can read more about it at NPR: Young Indians And Pakistanis Rewrite Their Shared History

The Good Country Index is an interactive map that ranks each country in a variety of areas, including culture, science, prosperity, etc. The rankings are based on data from the United Nations, and you can find more of an explanation here.

Breaking News is a current events news-reader designed in an intriguing way. You can type in whatever topic you want to read about — soccer, major news, refugees — and you’re provided with a list of headlines to stories about it. Clicking on the headlines will take you to the story. But the real interesting part of the site is that if you click on a globe icon on the upper right of the page, you’ll go to a world map showing you the location of the where the stories are originating. Clicking on the dots will also take you to the story.

NBC News produces an ongoing series of 30 Seconds To Know videos about current events and issues. They’re videos that last…thirty seconds, with an expert who explains a topic. However, it’s not just a talking head — it includes action shots and graphics, and the narrator doesn’t speak too fast.

The Washington Post regularly publishes a feature called “Five Myths.” They’ll typically pick a topic that’s been in the news and list five myths with a short explanation about each one. It’s pretty useful to teachers and students alike.

The Cost of Living Map lets you pick any two major cities in the United States and it compares their costs of living — overall and in specific categories.

The BBC has tons of great resources for use in the classroom, including in the Social Studies areas. You can find many of their sites on multiple “The Best” lists. I was particularly excited earlier this year when they unveiled the first in what they declared to be a series of “iWonder Guides” — one on World War 1. I immediately added it to The Best Resources For Learning About World War I. They’ve since published a number of additional resources, though it’s not clear if and how they’re connected to the iWonder series. They’ve got them all under the umbrella of a new title called Made From History, and that site looks like it’s sort of connected to the iWonder series, but seems to primarily have more multimedia resources.

Interactive Time-Lapse Map Shows How the U.S. Took More Than 1.5 Billion Acres From Native Americans is the headline of a useful article in Slate that gives details about the impressive interactive called The Invasion of America: How the United States Took Over an Eighth of the World. It’s a “must-see” and “must-use” site when teaching U.S. History, and is an excellent illustration of our country’s avarice.

Here’s an excerpt, followed by a video of the entire speech.

I’m also going to use the excerpt with a writing prompt in my U.S. History class. The prompt will be:

What does John Lewis mean when he says it’s important to get into trouble? To what extent do you agree (or disagree) with what he is saying? To support your opinion, be sure to include specific examples drawn from your own experience, your observations of others, or any of your readings.

Here’s a video that could be very useful in social studies classes and in IB Theory of Knowledge classes (it has a British focus, but can easily be used in the U.S., too):

Also, here are the “Best” lists I’ve posted in the past few months that are related to Social Studies:

The Best Resources For Learning About Freedom Summer

The Best Resources For Learning About The Children Refugee Crisis At The U.S. Southern Border

The Best Resources For “The International Day Of The Girl”

How Many Of Our Students Feel This Way? (Resources On The Shooting Death Of Michael Brown)

The Best Resources On Ferguson For Use In The Classroom

The Best “Lists Of Lists” Of Influential People, Events & Ideas