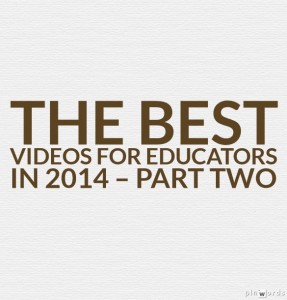 Another day, another year-end annual “Best” list (you can find all 1,400 Best lists here).

Here are my choices for The Best Videos For Educators In 2014 – Part Two:

Neil deGrasse Tyson responds to six-year-old – “How can first graders help the earth?”:

In The Best Resources For Helping Teachers Use Bloom’s Taxonomy In The Classroom, which is — by far — the most popular post I’ve ever published, I include videos using Star Wars, Finding Nemo, Pirates of the Caribbean, and other movies to teach Bloom’s.

Here’s another such video, and this one uses scenes from Harry Potter. Unfortunately, it has embedding disabled, so you’ll have to go to the link on YouTube.

Here’s a well-done video that provides an excellent short video of Carol Dweck’s research. I’m adding it to The Best Resources For Learning How To Best Give Feedback To Students. It’s also the only video on this list that I’m adding to The “All-Time” Best Videos For Educators:

Thanks to Wendi Pillars for sharing this video on Twitter. I’m adding it to The Best Funny Videos To Help Teach Grammar.

Bill Ferriter, whose blog has been one of the few on my blog roll for many years (and it should be in your RSS Reader, too), recently shared this video. I suspect this video will be played far-and-wide among English (and other subject) classrooms (it sure received lots of retweets on Twitter). It’s about a star football player’s engagement with reading.

I’m adding it to The Best Videos & Articles Where Athletes Explain How Reading & Writing Well Has Helped Their Career.

Here’s a good one titled “What Is Literature For?”:

What is Literature for? from Marcus Armitage on Vimeo.

Here’s a fun video on reading:

This interactive video, a book trailer for “Does Santa Claus exist?” is an amazing one on many different levels. I’ll certainly be having my IB Theory of Knowledge students watch it:

Sesame Street released a video called “The Power Of Yet” — a message on the growth mindset idea that even if you haven’t succeeded now, it’s just a matter of “not yet.” I’m adding this video to The Best Resources On Helping Our Students Develop A “Growth Mindset”:

Tavis Smiley has a new book out titled “Death of a King: The Real Story Of Dr. Martin Luther King, Jr.’s Final Year.”

He did a terrific interview on the Daily Show, and I’m adding this video to The Best Resources To Remember Dr. Martin Luther King’s Death (& Life).

TED Talks released a new Hans Rosling video (done with his son) called “How not to be ignorant about the world.” You can see it on the TED Talk site with all its bells and whistles, including a transcript, but I’ve embedded the YouTube version below. I’m, of course, adding it to The Best Hans Rosling Videos:

I’m adding this great video segment to The Best Resources For Learning About The Children Refugee Crisis At The U.S. Southern Border:

created an animated simulation of life through the eyes of a non-verbal child with an Autism Spectrum Disorder (ASD) “and her constant struggle to cope with the world around her,” as they write in their artist statement.

That description comes from an article in the New York Times headlined Look At Life Through Autistic Eyes. Here’s the video:

I’m adding it to The Best Sites For Walking In Someone Else’s Shoes, which contains other similar resources.

Check out this Kid President video. I originally posted it with this title: “I Don’t Hear Students Thanking This Retiring Teacher For Helping Them Score Well On Standardized Tests”:

TED Talks now has an updated playlist of The 20 most popular talks of all time.

Donna Brazile announced the formation of Democrats For Public Education at the American Federation of Teachers Convention in Los Angeles. It’s designed to support effective and teacher-supported education efforts. You’ve got to watch this of her speech at the Convention:

We’ve all seen dogs barking at each other through fences.

But I doubt you’ve ever seen them do this….

The Best Resources On Teaching & Learning Critical Thinking In The Classroom

Video: ‘I am a Liberian, not a virus’

Two Videos I Use When Teaching About Emotion In TOK