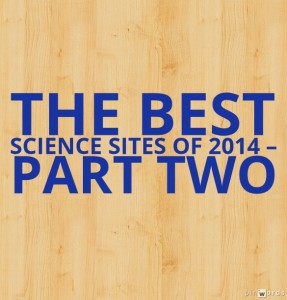 Here are my choices for The Best Science Sites Of 2014— Part Two (not in any order of preference):

The Best Resources For Learning About The Rosetta Mission

A Simple Lesson On Climate Change For English Language Learners

“If you’re observant about things happening around you, there are insights waiting to be discovered”

TED-Ed, which seems to me to be getting better all the time, has just created an “interactive periodic table with a video for every element.”

If you’ve ever taken a chemistry class, you know that memorizing all of the elements and understanding their properties can be difficult! To help provide a study aid, TED-Ed collaborated with Brady Haran, best known for his YouTube channel Numberphile and his extensive video coverage of the periodic table, to create a clickable periodic table with videos on every element.

The BBC unveiled a super-cool interactive called Your Life On Earth. You type in your birth date and your height, and an interactive display magically appears showing you what has happened since your birth. Here’s how the BBC describes it:

Find out how, since the date of your birth, your life has progressed; including how many times your heart has beaten, and how far you have travelled through space.

Investigate how the world around you has changed since you’ve been alive; from the amount the sea has risen, and the tectonic plates have moved, to the number of earthquakes and volcanoes that have erupted.

Grasp the impact we’ve had on the planet in your lifetime; from how much fuel and food we’ve used to the species we’ve discovered and endangered.

The interactive seems to be part of a bigger new site that has lots of interesting features. It’s called BBC Earth.

Show.me, the popular site that collects interactives from museums throughout the United Kingdom,  unveiled a brand-new (and sorely needed) redesign.

TIME published a neat interactive called “A 360-Degree View of Life at the Bottom of the Ocean.”

Steven Johnson hosted a new six-part PBS series called How We Got To Now that has a very useful website (he also wrote a companion book). Here’s how PBS describes it:

Johnson explains how the answers to the questions he poses in each episode — such as “how do we make something cold?” or “how do we create light?”— have driven other discoveries through the web of ideas and innovations that made each finding possible. Tracking each pursuit through history both ancient and contemporary, Johnson unlocks tales of unsung heroes and radical revolutions that changed the world and the way we live in it.

Here’s a trailer for the show, along with an interview Jon Stewart did with Johnson this past week. I’m adding this info to The Best Sites Where Students Can Learn About Inventions.

I’m adding this next video to The Best Resources For Learning About Rube Goldberg Machines: