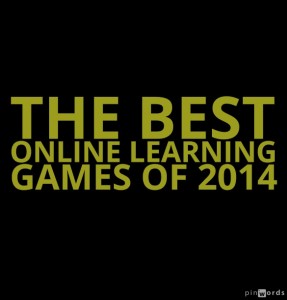 * be seen by me during 2013. So they might have been around prior to this time, but I’m still counting them in this year’s list.

Here are my choices for The Best Online Learning Games Of 2014:

Show.me, the popular site that collects interactives from museums throughout the United Kingdom, has unveiled a brand-new (and sorely needed) redesign. You can find many great games there.

The BBC has produced a very impressive online “interactive episode” — really, a “choose your own adventure” story — about World War One. Here’s how The Telegraph describes it:

Man vs. Wild: The Game is a choose-your-own-adventure story from The Discovery Network.

You can find many games at The Best Online Learning Simulation Games & Interactives.

Smarty Pins is a new online geography game from Google. It’s similar to some of the better ones on The Best Online Geography Games — you’re asked a question, provided a hint, and then have to put a “pin” on your guess for the answer. One of the nice things I found — at least, in the questions that I answered — is that you’re only shown the region of the world where the answer can be found.

Spacehopper is a new online geography game that isn’t easy but, after showing you a Google Street View image of a location, provides clues that make it less difficult. You’re shown a map with various dots on it, as well as the map outline of the country. After three guesses, you’re given the answer along with information on the location.

I recently learned about two new well-done online games in that genre that were nominated for awards at the Games For Change Festival:

The first one is Start the Talk: A Parent Learning Tool. It’s designed as a role-playing exercise for parents so they can practice speaking with their children about under-age drinking. Surprisingly — at least to me — it seems to offer some very good advice, and I can see it being useful to both parents and children. I’ll be sharing it at my Engaging Parents in School blog.

The other game that caught my eye is called Migrant Trail.

It’s from PBS. Here’s how they describe it:

Through the use of real-time resource management and by integrating characters, stories, and visuals from the film, The Undocumented, with intense gameplay choices, The Migrant Trail gives players another way to experience and understand the human toll of our border policies.
Citizen Sort creates free online video games where players sort and identify items as part of a serious science investigation. One of their series of games is called “Happy Match” where you have to describe various images. You can see the screenshot above. It appears to me that it could be useful for English Language Learners to learn some vocabulary, plus learn a little science, too. They have some other games on the site, and say they’re coming out with another one that looks particularly interesting called “Mark With Friends” that might also have ELL potential.

Each year for the past two years I’ve posted about a new online “choose your own adventure” U.S. History game created by Mission US, which is funded by the Corporation For Public Broadcasting and the National Endowment For The Humanities. First, there was one on the American Revolution, then on slavery. They unveiled a third one in the series, this one focusing on Native Americans, and it looks great. You can play A Cheyenne Odyssey here, and all the games here. You can read more about the new game here.

“The Fiscal Ship” May Be A Useful Learning Game

The Best Resources For Learning About The Drought Of 2012 (& Beyond)

A Look Back: All My Favorite Posts From The Past Eleven Years In One Place!