The Best Ways To Create Online Content Easily & Quickly In 2014 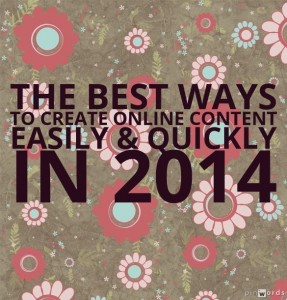 This list (a not particularly long one) brings together what I think are this year’s best ways to create online content easily and quickly. These web tools are excellent ways for English Language Learners, and others who might not be very tech-savvy, to have a good experience working with technology.

In order to make it on this list, web tools must be:

* able to be used to easily create engaging online content within minutes.

* willing to host user-created work indefinitely on the website itself.

The Best Ways To Create Online Content Easily & Quickly In 2011

Here are this year’s choices (not listed in order of preference):

ClipDis a new web and smartphone app that lets you type in any sentence and then provides it to you in a short video with actors from popular movies speaking it. Even better, you don’t have to register in order to create one and be provided a unique url address for linking to it. Here’s one I made.

ClassTools has created Twister, which lets you create fake tweets. You can read more about it at Richard Byrne’s blog, and I’ve added it to The Best Tools For Creating Fake “Stuff” For Learning.

The Rand McNally Trip Maker easily lets you design a trip anywhere in the United States, and you can add sites of interest along the way.

As mentioned earlier, I have a fairly popular The Best Tools For Creating Fake “Stuff” For Learning list. The fake “stuff” I’m referring to includes newspaper articles, sports “trading cards,” iPhone conversations, Facebook pages etc. These can be used for conversation practice, to create reports on historical figures (or on natural disasters or on just about anything) and for numerous other learning activities. Simitator is another one I’m adding to the list. It lets you create “fake” Facebook pages, Twitter threads and more. Unfortunately, though, you have to download your creation — it won’t let you link to it (most of the other tools on my Best list let you save them as Web pages.

Incredibox, the incredibly easy music-creating site that’s been on The Best Online Sites For Creating Music list for years, has just announced its annual update. Version Four has even more sounds to mix, and will only make it more fun for students to use. I have my English Language Learners create their tracks and then describe — verbally and in writing — why they made their particular composition and what they want people to visualize when they listen to it.

The New York Times has created the Chronicle. It’s their version of the Google Books Ngram Viewer, which charts word use over the years in the books they’ve indexed (see The Best Posts To Help Understand Google’s New “Books Ngram Viewer”). The Times, though, indexes word usage in its own history. The image at the top of this post shows the results of my charting “love” and “hate.” It looks like love is winning! The Chronicle is very easy to use and no registration is required. It, and the Ngram Viewer, can be used with English Language Learners and other students in a number of ways, ranging from just being a fun and simple way for them to play with words to being a tool to correlate certain word usage with political attitudes (as I did in a recent column at Education Week Teacher).

The same day The New York Times announced their own version of Google’s Ngram Viewer, the online review site Yelp unveiled their own. It’s called Yelp Trends and you can compare how often different words are used in reviews at cities around the world. It’s very easy to use and no registration is required. You can see two examples below that I created – comparing soccer, basketball and jogging in Sacramento and in London. Obviously, soccer isn’t going to be mentioned much in London since they call it football there. I wonder if I shared these with students how many would figure that out? Have students create their own and then challenge their classmates to explain the reason for the differences (after they figure it out themselves) could just be one fun way to use it in class — that is, if Yelp isn’t blocked by school district content filters. You can read more about Yelp Trends at Slate.

Transitmix lets you easily create a mass transit system for any city or town in the world, including how much it would cost to run. No registration is required, and you’re given a link to your creation. You can read more about it at Gizmodo.

Thanks to Katherine Schulten, I learned about the Hemingway app, a fun site that will evaluate your writing and tell you how to change it to Hemingway’s style.

It’s A Message lets you send a personal holiday message, along with images of snow falling on the address of your choices.