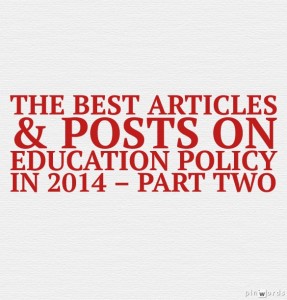 Here are my choices for The Best Articles & Posts On Education Policy In 2014 – Part Two (let me know what you think I’m missing):

I Used to Think … That Experts Understood the World is by Rick Hess at Ed Week and he followed that post up with Wait A Minute...

Returns to Teacher Experience: Student Achievement and Motivation in Middle School is the title of a new study at The National Center For Analysis Of Longitudinal Data In Education Research.

Teachers Are Not Superhuman is by Walt Gardner at Ed Week.

Gates Scholar, Tom Kane, Continues the Fight to Prove He Is Right is by John Thompson.

Teacher Evaluations Need to ‘Support, Not Sort’ was one of my posts at Education Week Teacher.  In Part One of a three-part series, American Federation of Teachers President Randi Weingarten, California Teachers Association President Dean Vogel, and 2012 National Teacher Of The Year Rebecca Mieliwocki shared their thoughts on teacher evaluations.

What Education “Reformers” Do Not Understand About Teaching and Learning is by Daniel Katz.

‘The Teacher Wars’: An Interview With Dana Goldstein is another one of my posts at Education Week Teacher.

The Original Charter School Vision is an excellent Op-Ed in The New York Times, written by Richard D. Kahlenberg and Halley Potter.

Education Is Not ‘Moneyball’: Why Teachers Can’t Trust Value-Added Evaluations Yet is an excellent Ed Week piece by William Eger.

For Reformers: An Important Paper on Worker Compensation and Incentives is by Paul Bruno, and is a very important piece.

The Teach Like a Champion Paradigm is a very interesting post about Doug Lemov’s methods. It’s by Ben Spielberg.

Seven things teachers are sick of hearing from school reformers appeared in the Washington Post.

Teaching Is Not a Business is the title of David Kirp’s op-ed in The New York Times .

“Stupid, absurd, non-defensible”: New NEA president Lily Eskelsen García on the problem with Arne Duncan, standardized tests and the war on teachers is from Salon.

The New York Times published a column that highlights all of what is wrong about merit pay. However, they talk about it in the context of doctors and the medical profession and not teachers. It’s titled The Problem With ‘Pay for Performance’ in Medicine.

Do Students Learn More When Their Teachers Work Together? is an excellent post by Esther Quintero at The Shanker Blog.

The New Yorker, two months after publishing an excellent article on the school reform fiasco in Newark which made The Best Articles & Posts On Education Policy In 2014 – So Far list)  published an extraordinary feature on the Atlanta testing scandal — Wrong Answer: In an era of high-stakes testing, a struggling school made a shocking choice — by Rachel Aviv.

Donna Brazile announced the formation of Democrats For Public Education at the American Federation of Teachers Convention in Los Angeles. It’s designed to support effective and teacher-supported education efforts.

You’ve got to watch this video of her speech at the Convention:

Gates’ Excuse for Poor Results of Educational Technology: “Unmotivated Students” and A Question for Bill Gates: How Can We Motivate Students When Their Futures Are Bleak? are both by Anthony Cody at Ed Week.

We Need Teachers of Color is from Education Week.

When Educators Understand Race and Racism is by Melinda D. Anderson.

Accountability vs. What We Want for Our Children is an excellent post at Education Week. It’s written by Marc Tucker at his Top Performers blog.

How Bill Gates pulled off the swift Common Core revolution is from The Washington Post.