“Majority of U.S. public school students are in poverty” (Depending On How You Define “Poverty”)

Majority of U.S. public school students are in poverty is the headline of a story in the Washington Post today.

This post is in three parts — first, some excerpts from The Post article, followed by tweets sent out by Paul Bruno in response, and then ending with some brief commentary and links. 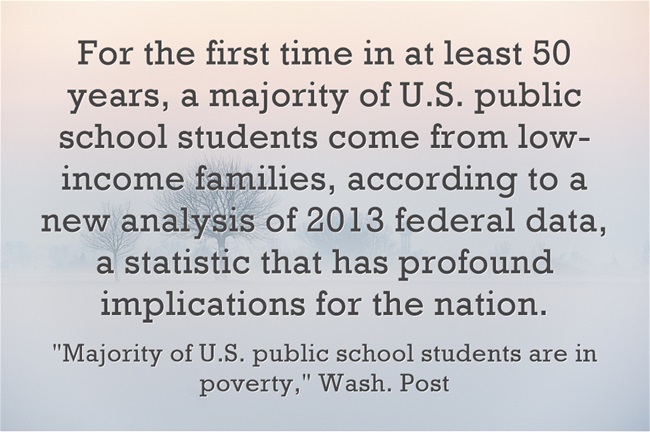 The story goes on to say:

The Southern Education Foundation reports that 51 percent of students in pre-kindergarten through 12th grade were eligible for the federal free and reduced-price lunch program in the 2012-2013 school year. The lunch program is a rough proxy for poverty…

Paul Bruno, who I respect a lot, followed up on the story with some tweets:

@Larryferlazzo The discrepancy is just that FRPL eligibility allows incomes up to 185% of the official poverty line. — Paul Bruno (@MrPABruno) January 16, 2015

So, to sum up: the official child poverty rate in the US is ~20%. At the same time, ~50% of public school kids are eligible for FRPL.

So, if you want to use the present federal definition of poverty, it is not accurate to say that a majority of schoolchildren live at that economic level.

That’s not the whole story, though. There is a lot of research out there demonstrating — fairly convincingly, in my humble opinion, that the present poverty level definition is not truly based in reality. Here are some articles about that topic:

The Real Numbers: Half of America in Poverty — and It’s Creeping Upward is from Alternet.

So, I think Paul raises an important point. But, nevertheless, I suspect that the Post’s headline is true if you consider what the poverty deadlines should be. It would have been better, I think, if the Post had written a little more about the differences between free and reduced lunch eligibility and the official poverty level.

I’m going to add this post to The Best Places To Learn What Impact A Teacher & Outside Factors Have On Student Achievement.

Update: Here are two tweets sent by an Ed Week reporter after I shared this post:

@MrPABruno @Larryferlazzo I used "low-income" in my post on the analysis. http://t.co/DTucs1sYMW

Half of All Public School Kids in Poverty? Be Careful. is from Mother Jones.

True Or False? Free And Reduced-Price Lunch = Poor is from NPR.