As regular readers know, I’m not a huge fan of the Common Core Standards (at least for English), but am now focused on figuring out ways to implement them in the classroom (see A Collection Of My “Best” Lists On The Common Core).

The math department at our school, with the leadership of Gretchen McMeekin, has embraced the new standards with enthusiasm. I have a lot of respect for the judgment of my colleagues, and an enormous amount of it for Gretchen. I’ve invited her to contribute a guest post sharing her thoughts on applying the Common Core Math Standards in our school.

Gretchen McMeekin has been teaching at Luther Burbank High School for 10 years. She is currently the math department head and teaches IB mathematics and Integrated Math 1. She grew up in the Washington DC suburbs and has Undergraduate and Master’s degrees from the University of North Carolina. (Editor’s Note: She’s also a very good basketball player) 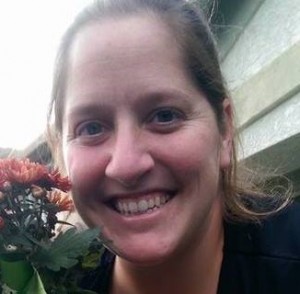 Most professionals will never be asked to factor a quadratic or simplify a square root. Most will, however, be asked to critique the reasoning of others. In my 10th year of teaching I have embraced the common core for just that reason. The standards of math practice ask students to be problem solvers with the ability to look at a situation, find patterns, utilize resources, and use math models in order to persevere in solving problems.

I get so frustrated when I see complaints on Facebook about common core: they put up a problem and say I don’t know how to do this. Why aren’t teachers teaching the easy way I learned? I find myself arguing that the new way is actually good and it teaches students number sense. I’ve lately realized this isn’t even the right conversation about common core.

The content standards have not changed that much with the common core. What has changed is the expectation that students can approach a problem before being told exactly how to do it. Students are expected to explain their reasoning and engage with each other rather than just the teacher.

Here’s what I witness in my Freshman Math 1 Classroom:

Find the equation of a line that connects the relation

Math explanation for those of you that are not math teachers:

Smartest student in class: I got y=3x-2

Almost Every other student in class: I got that too (because they don’t want to share if they didn’t)

Teacher: What did Kong do well in his thinking and what did Paul do well?

Kids discussion as witnessed in my class:

Jackie: They both got the starting point right but I think Kong is right because the rate of change is +6.

Richard: no you are wrong

Richard: Oh right. I see what you are saying about the change in y, but you forgot to consider the x’s?

Jackie: I don’t think that matters.

Marabelle: I looked at it a different way… if you plug in the point (2,4) it works in Paul’s equation not in Kong’s.

Teacher: Does everyone understand what Marabelle said?

Jackie: Yes. but I still think the rate of change should be 6.

Teacher: Ok, I need everyone to think about this. We know Paul’s equation is right, but how do you get the rate of change of 3 from the table?

Edgar: Maybe because of what Richard said about the x’s?

Jennifer: Right cuz it skips every other so it’s really changing 3.

Teacher: I don’t quite understand.

Kemari: Well, like it changes 6 for 2 so if you break it evenly it changes 3 each 1.

Alexis: Oh, you have to divide the y change by the x change.

These freshman are engaging in academic conversation in the math classroom. They are presenting their arguments and listening to others. Different perspectives are welcome because it helps kids see the problem in a different way. Often they understand each other better than they used to understand me. Right or wrong is no longer the only important aspect of problem solving – the conversation and the ability and willingness to express your opinion is also critically important.

To me the Common Core is about skills that you need beyond high school. The Standards of Math Practice nicely sum up skills we need that we can get from a math classroom.

I don’t think parents would complain about their teacher trying to teach the kids how to spot and explain patterns. They wouldn’t be upset about teachers teaching kids to be good calm logical arguers.  We would all celebrate our children being problem solvers with perseverance. 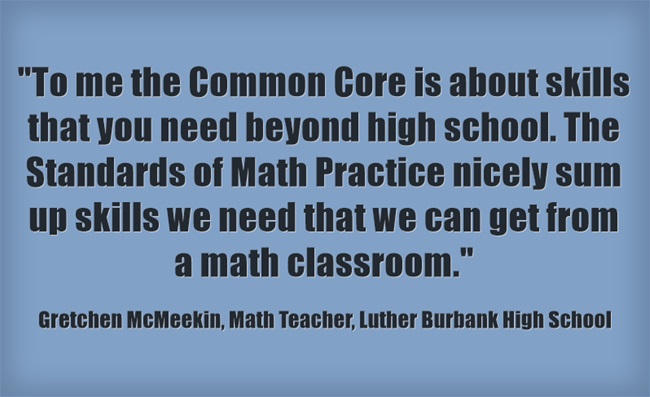 Let’s Write A Book Together!

“The Five-by-Five Approach to Differentiation Success”