I have been very critical of the research that many economists have done on education issues (see The Best Posts & Articles About The Role Of Economists In Education).

Liz Wisniewski, an educator and economist, left a comment on one of those posts, Great News! Only 2 Of Top 308 New Economists Want To Study Schools, and I invited her to expand it into today’s guest post.

Coincidentally, The New York Times has a “Room For Debate” feature today headlined Are Economists Overrated?

Liz Wisniewski has been an elementary school teacher in Massachusetts for the last ten years. Before that she worked as an economist in the energy industry for twenty years. She is hoping to put in another good ten years in as a teacher so that she can say she gave both wonderful professions their due!

Whenever economists weigh in on education issues I wince.

It doesn’t have to be this way.

Economists could add an important perspective to the current debates over education and positively impact the education of children in this country. However, playing such a role would require some serious consciousness raising and a relinquishing of the hubris that is often apparent when economists weigh in on education issues. With an attitude open to learning, there are so many meaty education topics for economists to explore. 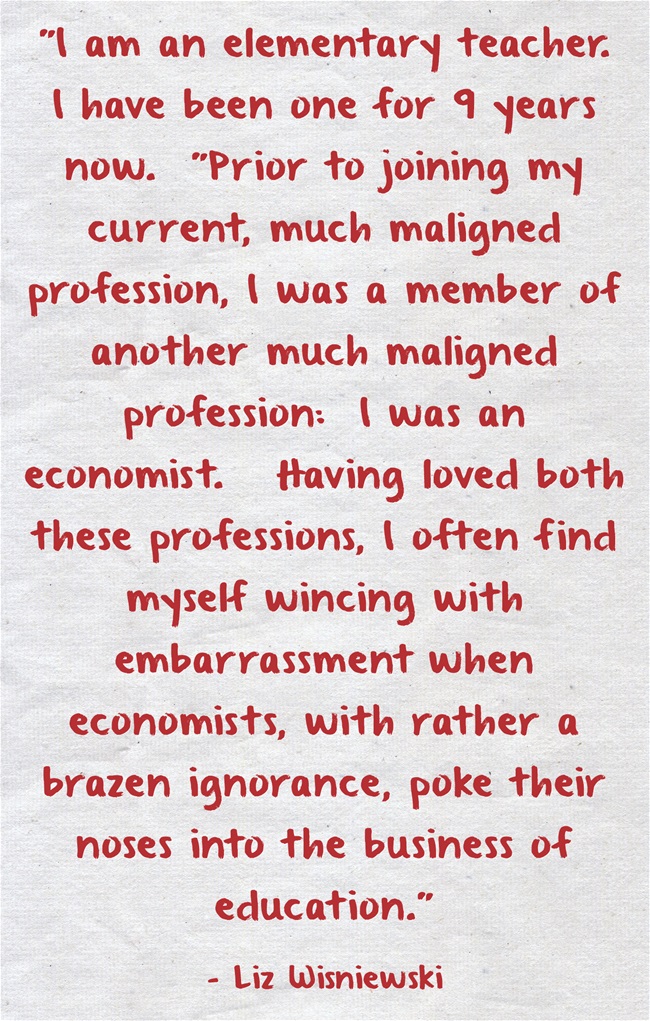 First, the economic history of the teaching profession deserves more attention. What a weighty subject is here for an economist who understands a bit about pedagogy and who is free of gender bias! Their input would be so helpful in the current debate around attracting talent to the profession.

Second, how I wish a knowledgeable, open-minded economist would weigh in on the issue of teacher tenure. An educated discussion of the likely economic impacts of revising this system would be a wildly refreshing and enlightening counter-point to the simplistic solutions many short-sighted policy makers purport.

Third, the wisp of an economist still alive inside me cries out for a worthy examination of the concept of “choice” as it applies to the public vs. charter debate. In my life I had to handle real world problems where market place “choices” only result in efficiency when consumers had “perfect knowledge” and other key assumptions upheld. I can only hope that some sound economic theory regarding competitive school choice has been bandied about somewhere, and that I simply have not run across it.

However, I understand when my education colleagues join in silent prayer– entreating that “education economists” will miraculously disappear and those dismal scientists will find another victim for their off-base opinions. But I wish there were more education economists than fewer.

Lastly I would like to tell my education colleges something they may not know about economists: like many of the students we work with, economists have a bit of a self-esteem problem that can close their minds to learning. Once economists were happy being “worldly philosophers,” but over time, economists wanted to make sure they were being taken more seriously – just like the cool science guys down the university hall. In short, economists developed “data envy.”

With the advent of computer technology, economists were able to enter the realm of the sciences and produce reams of data; they no longer were restricted to the realm of philosophy and sociology. Churning data is fun! But it can create a myopic and simplified view of issues involving the bothersome complexities of real people. The data fascination distorts so many issues and is especially true with regards to education (VAM anybody! How embarrassing that the mathematicians had to be the ones to say this was a crock!)

Without some serious consciousness raising, gender bending, ego deflation and broadening of the debaters to include economists not on the “free market” dole, it is unlikely that my dear old profession will play a useful role in education. While my economist heart breaks from the sadness of lost opportunity, my teacher heart breaks with embarrassment. 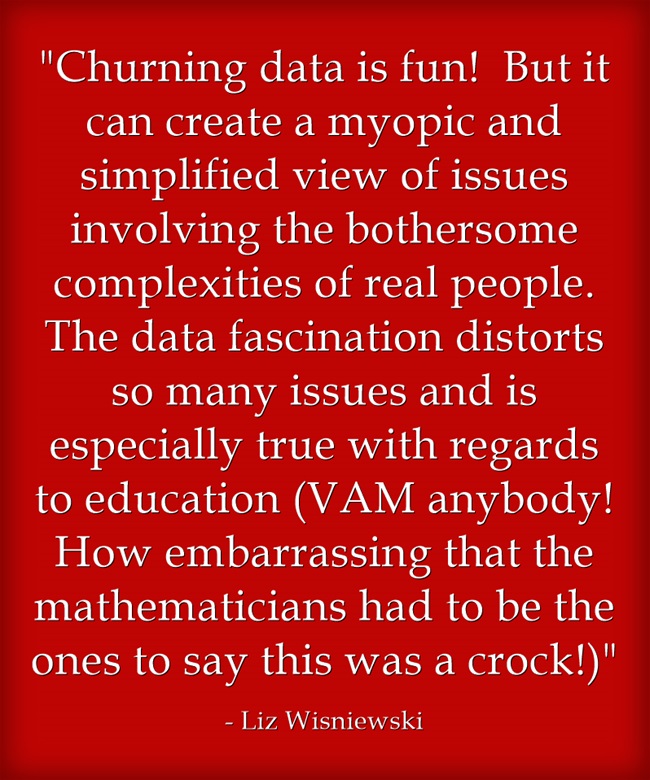 New Poll Finds A Lot Of Teachers Are Not Very Happy

“Are Test Scores the Right Measuring Stick for Teachers?”