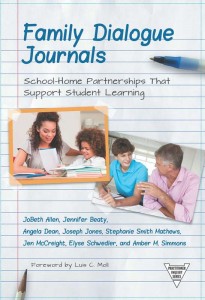 Teachers College Press and The National Writing Project have just published what looks to be a very useful book for educators titled Family Dialogue Journals: School-Home Partnerships That Support Student Learning. It’s written by many educators associated with the Red Clay Writing Project at the University of Georgia.

Here’s an excerpt they graciously allowed me to publish. I’m adding it to The Best Student Projects That Need Family Engagement:

Why Use Family Dialogue Journals?

“Now is the time to transform family engagement strategies so that they are intentionally aligned with student learning and achievement” (Weiss, Lopez, & Rosenberg, 2010, p. 2)

Jen McCreight’s first grade students spread out across the room, some at desks, some on their bellies on the rug, all writing in new black and white composition books. Jen rotated around the room, conferencing with students on the question they had constructed together to ask the children’s families: “What are your hopes and dreams for me this year?” She stopped to write “¿Cual es son sus suenos y esperanzas para mi?” in Naldo’s journal, as his family primarily spoke Spanish. Naldo’s writing already consisted of multiple sentences about his dream of learning to drive a car. Her eyes widened when she realized he was writing entirely in Spanish. He was a fearless speller, stretching out the sounds he heard, e.g., “keyro” for “quiero.”

“My mom wants me to learn Spanish and English this year,” Naldo explained.

She will teach me to read in Spanish and I will teach her English, because she doesn’t know much English yet and she wants me to help her learn.”

The following Monday during Morning Meeting as students shared what they and their family members had written about first grade hopes and dreams, Jen highlighted Naldo’s entry and encouraged other students to write to families in their home language. Several did. In a school with 69% Spanish speaking families and no biliteracy instruction, the students created their own curriculum, learning from their families through Family Dialogue Journals (FDJs).

Ninety miles away in a large urban school district, Angela Dean’s ninth grade, students and families wrote about the masks people sometimes wear. They were studying issues the characters faced in the novel Bronx Masquerade by Nikki Grimes.  Julian considered in what ways he wore masks like the characters of the book.

Julian: Dear Mother, In literature we’ve been reading a book called Bronx Masquerade. It’s about high school students and each chapter is a different student. The students talk about their life, discuss problems, and then write a poem that reflects on them or somebody they know. Most students in this society wear masks. Metaphorically speaking. Meaning they act one way around others and feel another way inside. But most students act like this because they are different and feel like they don’t fit in their surroundings. I feel like this sometimes when there are a lot of tall people around me and other times when I’m the only black person around. Have you ever felt different in a way or not accepted by others?

Julian’s mother: Being the only girl growing up in a house full of boys and the youngest of four, I always felt different because I was a girl and was told I would not play football or box. They always told me that I was too young to play or do certain things so I never felt like I belonged until I found my own friends.

Angela: I can relate. When I was young, a boy told me I couldn’t be a football player. I argued, but he was adamant—no girls could play football. I went home and told my mom. She told me that I needed to go back and tell him I could be anything I wanted. I did. He still didn’t agree. I’ve often felt that I had more to prove with my guy friends—I competed against them in classes when it came to grades. I didn’t want to seem dumb. A lot of girls tended to play the whole airhead routine, but I wanted to be seen as smart and equal.

This Family Dialogue Journal sequence allowed Julian to critically examine how he saw himself in society. In response, his mother and Angela, as women, were able to validate his sense of inadequacy when around those different from himself. Angela saw entries such as this as promoting her goals (and those of the Common Core State Standards) for developing argument writing, considering multiple perspectives, and expanding critical thinking.

The Rationale for Family Dialogue Journals

In their call for “Rethinking Title 1 Parental Involvement: Moving Beyond a Checklist of Activities to a Systemic Plan for Sustained Family and Community Engagement” United States Department of Education officials Bega, Johnson, and Jasper (2012) emphasized re-envisioning parent and community involvement.  That vision for sustained family and community engagement includes the systemic inclusion of parents and families as partners with local educational agencies and school staff in their child’s education in a manner that promotes shared responsibility for student learning; is responsive to student, parent, and family needs; and reinforces that learning begins at birth and takes place in the home, school, and community. From analyzing parental involvement research Bega et al. concluded that effective involvement “means the participation of parents in regular, two-way, and meaningful communication involving student academic learning and other school activities,” including ensuring that “parents play an integral role in assisting their child’s learning [and] are encouraged to be actively involved in their child’s education at school.” 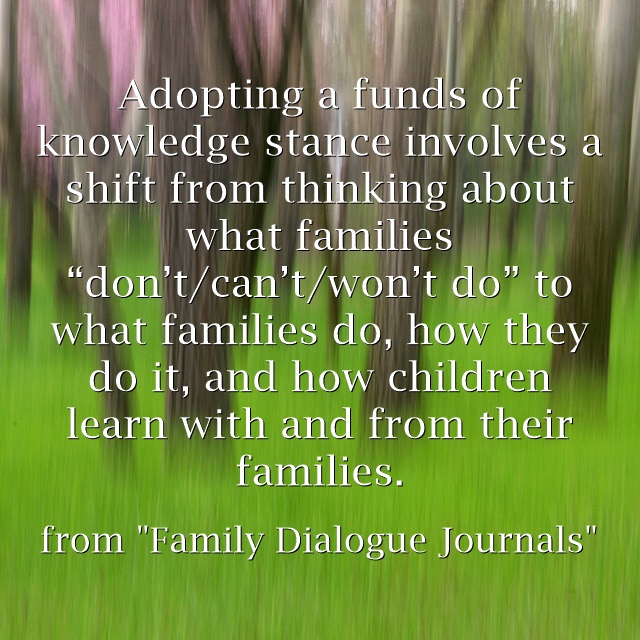 This conclusion is bourn out by rigorous analysis of 80 studies on parental involvement programs and practices, pre-kindergarten through high schools throughout the United States, conducted by Anne Henderson and Karen Mapp (2002). Overall, they found, “The evidence is consistent, positive, and convincing: many forms of family and community involvement influence student achievement at all ages” and across economic and cultural groups. Three of their major research findings guided our work. Across studies, family engagement that led to increased student learning had the following characteristics:

As we designed, discussed, and analyzed what happened in our implementation of FDJs, we used these tenets as a touchstone. Did student-family-teacher interactions in the journals connect learning at school with learning at home? Did we provide ways for families to support their children at home without imposing school norms on family life? (Frankly, we struggled with this one.)

And were the relationships we built with families respectful and reciprocal? We asked ourselves this third question with a deep commitment to learning and incorporating family funds of knowledge (Gonzáles, Moll, & Amanti, 2005). Adopting a funds of knowledge stance involves a shift from thinking about what families “don’t/can’t/won’t do” to what families do, how they do it, and how children learn with and from their families. Family funds of knowledge may include work in and out of the home, religious and cultural traditions, home and vehicle repair, childcare, medicine, language and knowledge of home country, musical ability, entrepreneurial ventures, and more than we could have imagined before we began the FDJs. Gonzáles et al., learned family funds of knowledge through developing out-of-school relationships at ballgames, religious and family events, and primarily through family (home) visits.  Many of us participated in one or more of these face to face interactions regularly. But we wanted a more consistent avenue for dialogue with families, dialogue that focused on student learning.

This book is about our development, implementation, and inquiry into Family Dialogue Journals, a “regular, two-way, and meaningful communication involving student academic learning” that seeks to be “responsive to student, parent, and family needs” (Bega et al., 2012).  The project grew out of our own needs, previous experiences, and dissatisfaction with what often “counts” as “parental involvement” (showing up at the school). It also grew out of what we learned from other teachers and families. 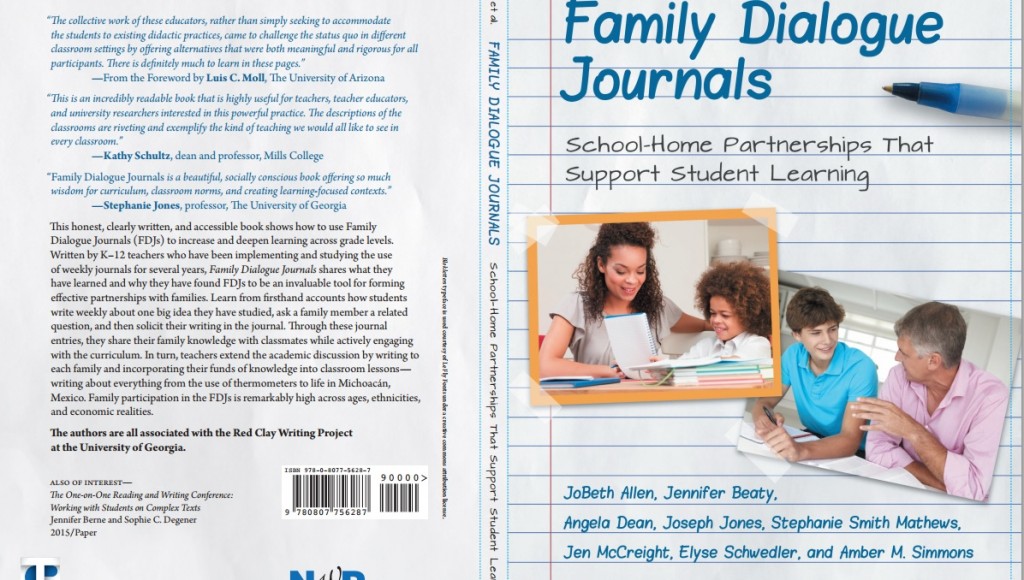 “FiveThirtyEight” & “Vox.com” Are Two New Free Online News Sites — Here’s What I Think Of Them

A Neat Way To Use A Video In Class