Quote Of The Day: The Appeal Of “Grit”

Thanks to Carl Hendrick and Alexander Russo, I learned about the American Prospect’s new article titled Teaching Character. It provides what I think is a well-written critical perspective on the recent public interest in teaching “grit,” and also includes fair responses from supporters.

As I’ve written before, I think teaching grit can have a place in classroom, as it does in mine, but also needs to recognize the grit that many of our students have already and can’t be viewed as a cure-all — it has to be kept in its place. I’m a big supporter of applying Social Emotional Learning in schools, but am concerned about some viewing it as a Let Them Eat Character policy in place of providing the needed financial and policy support our schools and communities need (see my Washington Post column, The manipulation of Social Emotional Learning).

Here’s an important quote from the American Prospect article from Pam Moran (I’ve written about her in the past): 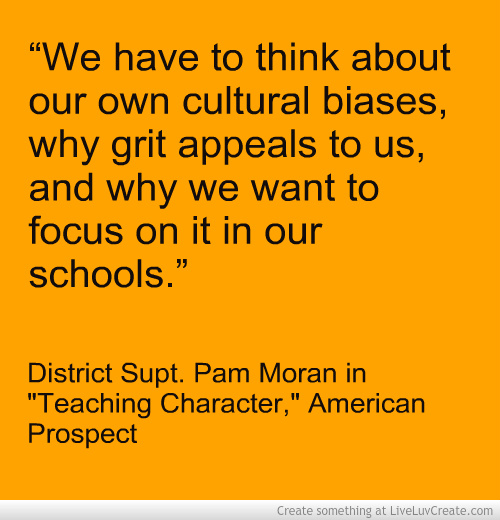 I’m adding this post to The Best Resources For Learning About “Grit.”

More Resources On The Idea Of “Becoming What We Read”

Highlights Of A Reddit Chat With Angela Duckworth & Roland Fryer

Depressing Statistic Of The Day: BIG Disappointment In Title 1 Funding

Quote Of The Day: Sir Ken Robinson On The Value Of Practice