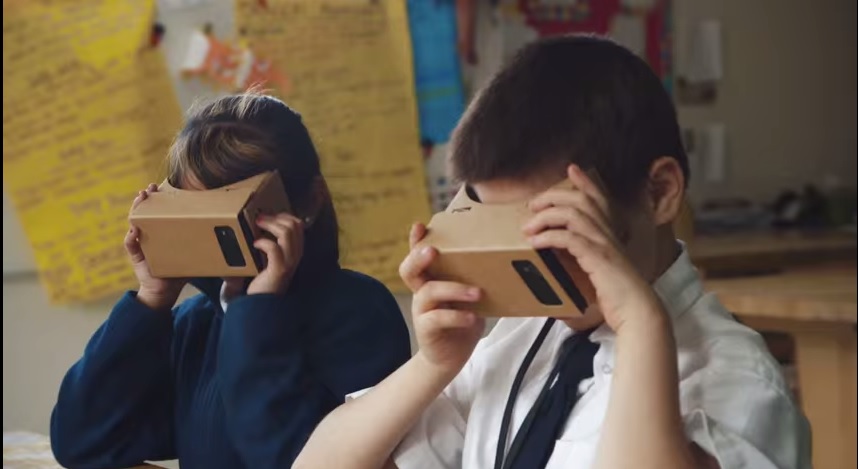 I’m a big advocate of taking students on real-world field trips and, in fact, am recovering today from two relatively insane field trips in a week of seventy students each.

In addition, I try to take advantage of virtual field trips to places where it’s not feasible for us to go in the the “real world.”

Google resources are prominent in The Best Resources For Finding And Creating Virtual Field Trips. And, yesterday, they made another big announcement unveiling a new project called Expeditions.

Basically, teachers will be able to choose locations from around the world using an iPad and then:

send synchronized three-dimensional 360° panoramas to each student’s Cardboard viewer, pointing out areas of interest in real time and instantly pausing the trip when needed.

Yes, that’s right — students would have individualized Cardboard viewers — sort of virtual reality glasses (though students would also be able to view the images on other devices, too).

Here’s a Google video showing what it might look like in a classroom (and here’s another report on how it works):

While Expeditions can be used on devices already in the classroom, they come alive with Google Cardboard. Our pilot kit is a collection of all the hardware needed to go on Expeditions in full virtual reality — a tablet for the guide, VR viewers for each student, a speaker to provide ambient sounds and a durable box to transport, charge, and store it all. We know many schools don’t have great Internet service (or any at all) so we built Expeditions to work without it. The kit includes a router that allows Expeditions to run over its own local Wi-Fi network so there’s no buffering, dropped connections or lengthy loading times.

It’s unclear to me if they’re making these “pilot kits” available for free or if schools have to pay for them. It seems like the Cardboard viewers cost about $20 each, though Google also makes the designs available so really ambitious teachers could have students create them. However, since Google introduced a new Cardboard version yesterday, I don’t know if the new designs are on their site or if those are for the older kind.

I wouldn’t want to deal with having to make them, and I’m hopeful they will be making the kit, or at least the Cardboard viewers, free to schools.

Real-world trips can’t be beat but, if you’re going to go on a virtual one, it seems like “Expeditions” is going to be the coolest way to go….

This Is Sure Interesting: “Google May Start Handing Out Gmail Accounts to Kids”