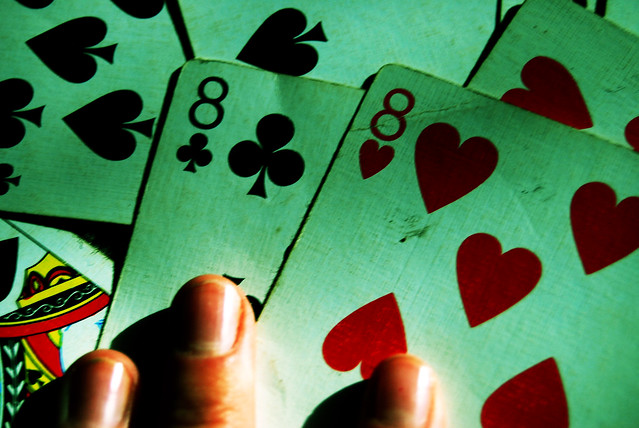 I just saw this video (the first one embedded below) of an amazing card trick on YouTube. In it, a man in a pub uses a deck of cards to tell a story.

It got me thinking about adapting it into a fun writing activity for English Language Learners.

I wonder what would happen if I gave groups of two-or-three students ten cards, and asked them to use them to tell a story – they would have to use a card in each sentence (One day the old King went out for a walk. He saw six red birds…)?

This video might not be the best to show as an example, since the accent is thick and they are also obviously drinking in a bar. However, I did a quick online search and was surprised to learn that storytelling card tricks appear to be fairly common, though the idea is new to me. Unfortunately, most of the ones I saw were inappropriate for classroom use (sexism, among other reasons). But I did find another version of the first one that had clearer pronunciation. And, of course, a teacher could quickly create his/her own model. The last video I’ve embedded is a TED Talk version of this kind of card trick — starting at around the four minute mark.

I don’t think I’ll have time this year to try out this idea since we only have five days left of school, but I’ll definitely put it in my “back pocket” for the future.

What Will You Do Differently Next School Year?

Congrats To 2016 ASCD Emerging Leaders Class – Consider Applying To Be Part Of It In 2017!