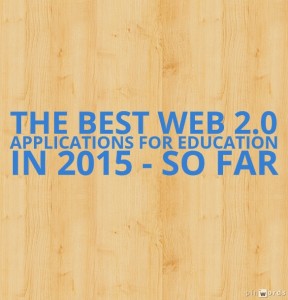 As regular readers know, it’s time for me to begin posting my mid-year “The Best….” lists. There are over 1,400 regularly updated lists now.  You can see them all here.

* completely browser-based with no download required (however, I’ve begun to make exceptions for special mobile apps).

Some sites I’m including this year are primarily geared towards teachers creating content for classroom use, but could also easily be used by students.

It’s possible that a few of these sites began earlier than this year, but, if so, I’m including them in this list because they were “new to me” in 2015.

You might also want to see my recent ASCD Educational Leadership article, Apps, Apps Everywhere: Are Any Good, You Think?

The Best Tools For Creating “Word Frequency Charts” For Books, Articles & Movies is a new Web 2.0-related “Best” list I published this year.

The Best Web 2.0 Applications For Education In 2014

I don’t rank my mid-year lists, but do place them in order of preference in my end-of-year lists (though I did add three of them to my All-Time Best list – Quizizz, Edueto, and the StoryCorps app). Just because a tool is on this mid-year list does not mean it will make the cut for the year-end version.

Here are my twenty-sixt  choices for The Best Web 2.0 Applications For Education In 2015- So Far (not ranked in any order):

I’ve written about Russel Tarr’s site ClassTools many times, including featuring it in a post titled This Is The Best Web 2.0 Site For ELLs & May Be The Best One For All Students. He recently released another tool to join the many he has already. It’s called the Breaking News Generator!. Students can create a screenshot of a newscast with a news crawler at the bottom. Like his other tools, it’s free and simple to use.

Quizizz, which is free, lets you access tons of previously-created learning “quizzes” and also lets you create your own. Once you as the teacher joins, which takes seconds, you pick a quiz; are given a code for a virtual room; then give the code to your students, who just log in with the code and a nickname (they don’t have to register with the site). When all your students are set, you click “start game.” You see the leader board as do the students as they’re progressing through the quiz. In a number of ways, it’s similar to Kahoot. However, the key advantage that Quizizz seems to have over Kahoot is that with Quizizz, students see the questions, answers, and their leaderboard on their devise. With Kahoot (and please correct me if I’m wrong), students’ devices only show the answers and they have to look at an overhead to see the questions. In antiquated computer labs like the ones at our school (and, I suspect, at many others), we don’t have the capability of projecting a screen for students to see it.  I’ve added Quizizz to my All-Time Best list.

Deekit is a new tool for collaboratively creating online whiteboards.It’s similar to other whiteboard tools on The Best Online Tools For Real-Time Collaboration list, though it does appear to have more bells and whistles. It’s free — at least, for now — and you can read more about it atTechCrunch.

Parapara Animation is a cool new Mozilla tool.  It’s a super-easy way to draw animations. You can read more about it at Richard Byrne’s blog.

Edueto has got to be one of the best Web 2.0 sites of the year, and perhaps the most useful one for teachers and students. And it’s free. Teachers can create exercises in any of the forms listed in the above screenshot and assign them to a virtual class they create. Students can do the activity and teachers can track their progress. You can also access a library of exercises created by other teachers that you can assign “as is” to students or edit. The exercises are very easy to create, and each has a short instructional video (I have to say that I wish the videos didn’t move quite so fast, though). One of the particularly important features it has, unlike some quasi-similar automatic activity creators out there is that, for example, teachers can strategically place the blanks to be filled in the “gap-fill” exercise, instead of just having an algorithm choose them. I’ve added Edueto to my All-Time Best list.

Hypothes.is is a neat-looking online tool to annotate webpages.

Imgur, the wildly-popular photo and GIF-sharing site, has now made it easy to embed the resources they have on blogs and websites, and the embed coded includes automatic attribution. You can read more about it at this TechCrunch post.

Render Forest is an online video-maker. You can learn more about it from The ASIDE Blog.

Meeting Words is online tool for creating documents collaboratively. You can read more about it at Richard Byrne’s blog.

Russel Tarr unveiled yet another new feature at his ClassTools site that lets users create a “3D Gallery” with captions.

Anyone who’s every listened to NPR is probably familiar with StoryCorps, and I’ve published several posts sharing their resources. They recently unveiled a new free mobile app at the TED Conference that allows anyone to record an interview with anyone and upload it their new site, StoryCorps.me. They have both iPhone and Android versions, and they’re great! The app provides multiple suggestions for questions, depending on who you are interviewing (you can also add your own). It’s a perfect tool for having students interview their parents, grandparents or other older family members (which also makes it easy to ensure students have parental consent — by the way, their policy states users must be over 13). It’s super-simple to use. Of course, classmates could also interview others, as long as teachers had parental permission. I’ve added this app to my All-Time Best list.

I have a lengthy list of free tools at The Best Tools For Creating Visually Attractive Quotations For Online Sharing. Here’s a new addition to that list: Live Luv Create .You can use many of their stock images or use your own, and then add text. The two negatives to the site are, one, even though it’s free, you do have to register with it. Most of the other tools on my list let you create quotes without requiring registration. The other problem is that though it provides an embed code when you first create your image, unless you grab it then there doesn’t appear to be any way to find it again.

Five Thirty Eight wrote an extensive article  about a new free Google Chrome Extension called Draftback. It allows you to see the entire writing process unfold for any Google Doc. In other words, every mistake, correction, revision, etc. — either in the “realtime” it took or in a “speeded-up” time. You can then easily embed the created “Draftback.” I’m not sure if it’s just a cool toy that people will use once to try it out, or a tool that could be very effective in teaching writing to students.

Firefox has unveiled “Hello,” a video-calling system that is built into its browser. No registration is necessary. All you have to do is easily “create a conversation,” name it, and send the url link to the person with whom you want to talk. You can also create a contact list. They can use other browsers, like Chrome, and still use the link to the video call. Unfortunately, it appears to me that you can’t have group video chatrooms — in other words, it appears that you can just have two computers using the url address.

Trello is another free tool that teachers and students can use to create online corkboards/bulletin boards (like Padlet and other sites on The Best Online Virtual “Corkboards” (or “Bulletin Boards”)list).

Prezi, the incredibly popular (though, to me, still rather discomforting to look at) presentation tool, has unveiled an iPhone app called Nutshell.

Presentate is a new tool for creating online presentations. It looks nice, but you have to register for its beta. I received my invitation fairly quickly. I’m not convinced the world needs yet another online presentation site, but I’ll still add it to The Best Ways To Create Online Slideshows.

Thematic is another tool for creating slideshows. I like it a little better than Presentate, and it’s now open to the public. You can learn more about it at Richard Byrne’s blog. I’m adding it to that same “Best” list.

One is Bunkr. Last May they unveiled a “new” Bunkr, which was a big improvement. Recently, they supposedly unveiled a new Bunkr which has been completely redesigned. You can read a wayover-the-top review of it at TechCrunch. It is worth a look, though.

Here’s another new online game from Russel Tarr’s ClassTools site: It’s called Connect Fours and is based on a BBC game show that I’ve posted about previously in “Only Connect” Is A Great Game For The Classroom. As I wrote then, the concept of the game was great was for English Language Learners, but the online BBC game itself was too advanced for them. I had suggested, though, that it would be easy for students and teachers to create their own versions with paper and pencil, and I’ve done that numerous times in my classes. Thankfully, though, Russel has now created a super-easy version that teachers and students can use to make their own online without having to register. In the game, there are sixteen squares with words on each one. The player needs to use the words to create four categories of four words each. It’s a great game that helps develop the higher-order thinking skill of categorization.

Russel Tarr has yet another new online game called Dustbin. Students can very easily create a game — without registering — that requires players to categorize words. Categorization is a higher-ordering thinking skill, and I’m always on the look-out for interactives that have that requirement.

I’ve previously posted several times about how much I love the Shadow Puppet app — there isn’t anything out there that’s an easier tool for creating a quick audio-narrated slideshow. It’s perfect for English Language Learners. Today, the company behind Shadow Puppet has just released another new and free educational app that looks like it could be very useful. It’s called Seesaw, and basically lets students easily create digital portfolios that can be shared with teachers and parents. It’s free for teachers and students, and has a free and paid version for parents.

There’s the the new Public Domain Project, which offers a growing number of tens of thousands of images and clips that can be used freely.

Hstry is a nice new online too for creating timelines. Richard Byrne wrote a post about it, and I’d suggest just you visit his blog to learn more. As he points out, one of the particularly nice features of this free tool is that teachers can create virtual classrooms for their students.