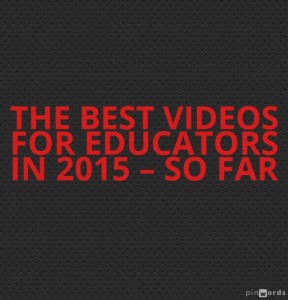 Another day, another annual mid-year “Best” list (you can find all 1,400 Best lists here).

Here are my choices for The Best Videos For Educators In 2015 – So Far (some may have been produced prior to this year, but are just new to me):

Here’s a video and article about turning a Van Gogh painting to 3D. I think it would be useful in a Theory of Knowledge discussion of perception and art…:

In addition to just being fun to watch, English Language Learners could watch it and then describe what they saw happening….:

Learning about Plato’s Allegory of the Cave is a key lesson in most IB Theory of Knowledge courses, and I’ve also been able to integrate it into my English Language Learner classes, too.

You can see many of the resources I use in the classroom, including student-made videos of modern parable versions, at our class blog.

Today, TED-Ed released a lesson and accompanying video that will be a nice addition.

John Lewis was interviewed by Jon Stewart on The Daily Show. Here’s the extended interview (there may be something wrong with the show’s embed code. If you can’t see it here, go directly to the Daily Show site):

I’m adding it to The Best Resources For Teaching About Selma.

I’ve previously shared about a group called PERTS from Stanford, which is working on growth mindset and other SEL issues.

They’ve now published short videos on topics that would be useful in the classroom, and have a site that they are expanding to helped interested educators connect. In addition, that same site has good resources on helping students learn from mistakes and providing students effective feedback.

Here is just one of the videos on the site. I know I’ll be using a number of their resources in my classroom:

You can now watch forty-one short clips from the show on National Geographic’s YouTube Channel.

They’re excellent for use in many lessons, particularly for IB Theory of Knowledge when we study human sciences.

I’ve previously posted about studies showing that physical movement can help second (or third) language learning (you can see those posts at The Best Resources On Students Using Gestures & Physical Movement To Help With Learning).

Here’s a video on that research:

The question, “Was Mathematics invented or discovered?” is discussed in almost every IB Theory of Knowledge class.

I’ve previously posted about a a TED-Ed video on this topic that I didn’t think was a very good one.

The World Science Festival has just published a much better video responding to this question, and which I’ll definitely be using in class:

This video from The SciShow on YouTube is about the Nobel Prize for medicine given to the developer of the lobotomy.

It’s of particular interest to me since my Uncle was one of a number of immigrant children from low-income families who were diagnosed with so-called behavior disorders and lobotomized. This practice took place in the 1940’s. He was institutionalized for the rest of his life following the procedure. I have vivid memories of his visits to us — from the moment he entered our home he was always looking at his watch concerned about getting back to the hospital on time.

Here’s an intriguing video from BuzzFeed. Thanks to Open Culture for the tip:

I’m adding this video to The Best Videos Illustrating Qualities Of A Successful Language Learner.

Neil deGrasse Tyson explains the meaning of life to a six-year-old:

Three years ago, the PBS News Hour did an excellent segment on self-control (I originally posted about it at Here’s A Video On Self-Control I’m Showing My Students First Thing Next Week).

They recently did another very good one, focusing on the Marshmallow Test – you can see the transcript here.

My only critique of it is a line that is always infuriating to me when people talk about charter schools. The segment mentions that the KIPP school students are selected by lottery and suggests that makes them comparable to students in other public schools. However, it doesn’t mention the fact that families who are particularly invested in their children’s education are ones who would go through the effort of registering and participating in a lottery, which makes blanket comparisons to students in other schools invalid. Of course, I also have other concerns about KIPP’s “character education” program.

Nevertheless, it’s a very good segment that I’ll be showing in class. I’m adding this post to The Best Posts About Helping Students Develop Their Capacity For Self-Control.


There’s a great CBS News video of college football star Malcolm Mitchell’s love reading on The Best Videos For Educators In 2014 – Part Two list (you can also find it at The Best Videos & Articles Where Athletes Explain How Reading & Writing Well Has Helped Their Career).

Then I found a second video sharing his story at Jackie Gerstein’s “Best” list of videos.

I’ve previously shared Sesame Street videos that have been emphasizing Social Emotional Learning Skills like self-control, and you can see them all at The Best Posts About Helping Students Develop Their Capacity For Self-Control (of course, earlier this week Cookie Monster also decided he was tired of delaying self-gratification).

They published a new one that models a classic self-control strategy:

Professor and researcher Carol Dweck gave a TEDx Talk shared by TED titled “The power of believing that you can improve.”

I’ve embedded it below, but you can also see it on the TED site at the previous link. That site also has a written transcript of her comments. 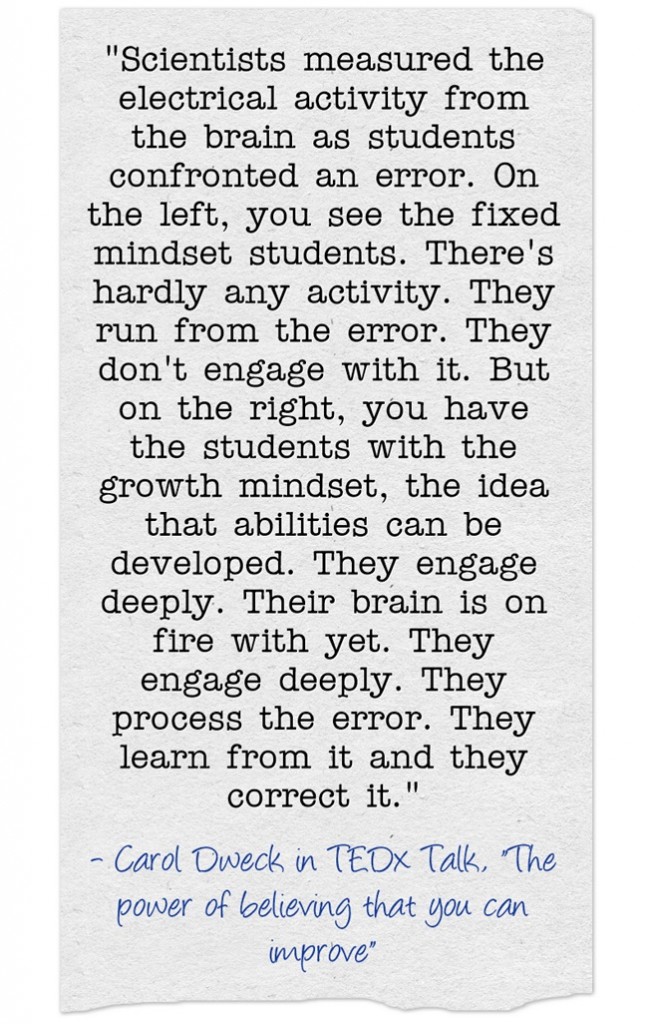 I was also struck by this passage:

“…we can actually change students’ mindsets. In one study, we taught them that every time they push out of their comfort zone to learn something new and difficult, the neurons in their brain can form new, stronger connections, and over time they can get smarter. Look what happened: in this study, students who were not taught this growth mindset continued to show declining grades over this difficult school transition, but those who were taught this lesson showed a sharp rebound in their grades.”

That’s certainly been our experience after teacher Dweck-inspired lessons you can find at The Best Resources For Showing Students That They Make Their Brain Stronger By Learning.

Daniel Coyle shared this video on Twitter. I’m adding it to The Best Resources For Showing Students That They Make Their Brain Stronger By Learning:

Bob Greenberg, who has created an extraordinary collections of short video talks by educators from around the world (see Brainwaves Video Anthology Is A Great Collection Of Short Videos Of & For Educators), came to our school and videotaped me talking about how to help student motivate themselves.

Though I talked for longer than I had planned (the video lasts twelve minutes), I think it came out pretty well and people might find it useful.

And, of course, check out all of the other videos in Bob’s collection.

The Importance Of Follow-Up Questions