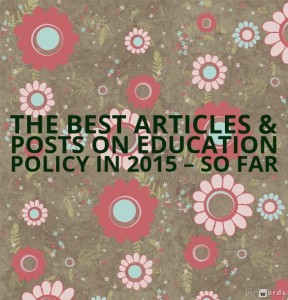 Here are my choices for The Best Articles & Posts On Education Policy In 2015 – So Far (let me know what you think I’m missing) – these are not listed in any order of preference:

‘We now know students cannot be tested out of poverty’ is by Judith Browne Dianis, John H. Jackson and Pedro Noguera.

The Teachers of Color ‘Disappearance Crisis’ contains pieces by Gloria Ladson-Billings, Travis J. Bristol, and Terrenda Corisa White and was published in my Ed Week column.

What teachers really need to stay, improve and succeed appeared in The Washington Post.

Accountability for Whom? is by Pedro Noguera.

Where Are the Teachers of Color? appeared in The New York Times.

The gap between rich and poor schools grew 44 percent over a decade. is a comprehensive and nuanced article in The Hechinger Report about school funding.

The McNamara Fallacy and the Problem with Numbers in Education is a great post by Carl Hendrick.

‘School Choice’ and Disenfranchising the Public is by Peter Greene appeared in the Huffington Post and a related piece by a School Superintendent, titled Vouchers still vouchers by any other name, appeared in a San Antonio newspaper — both are very good.

America spends more than $600 billion on schools. Here’s where it goes and why it matters. is from Vox. It gives a pretty thorough analysis — not one that I’ve seen anywhere else.

The Hidden Costs Of Teacher Turnover is a new, and very important, report from NPR.

Charter School in Miami Fails, but Proves Useful on Jeb Bush’s Résumé is from The New York Times.

Dave Powell has written two good posts on Value-Added Measurement: The Declining Value of Value-Added Models, and Why They Persist Anyway and Does the Teacher Matter or Not?

John Fensterwald has written an excellent article for Ed Source describing what’s happening here in California in the name of “school accountability,” and it certainly doesn’t look like Arne Duncan’s vision. You’ll want to read the whole piece, titled Moving beyond a single measure of a school.

Separating fact from fiction in 21 claims about charter schools appeared in The Washington Post.

Federal Policy on Teacher Quality: Is Accountability the Answer? is a thoughtful Ed Week piece by Marc Tucker.

Russo’s Disheartening “Eight Lessons for Funders and Grantees” is by John Thompson.

How teachers unions must change — by a union leader is a must-read piece by Bob Peterson in The Washington Post that originally appeared in Rethinking Schools.

John Thompson has written a must-read post over at This Week In Education about a report quoting Gates Foundation insiders describing the foundation’s practices.

Politico published a huge investigative piece on Pearson headlined “No Profit Left Behind.”

The Persistent Misidentification Of “Low Performing Schools” is another thoughtful post from the Shanker Blog.

A guide to No Child Left Behind as Congress tries to rewrite the law provides very good background on the issue and appears in Vox.

Longer school days, school years: Somewhat helpful to boosting student learning, but amped-up teaching does more, study finds is the headline of an article in The Oregonian about the results of a major study.

What Schools Could Use Instead Of Standardized Tests is a short and sweet review of possible alternatives to using standardized tests in schools. It’s probably the best thing I’ve seen on this subject.

The Promise and Peril of Turning Student Learning Into a Number is a very good column by Justin Minkel in Education Week.

One day after The Washington Post published an expose of test-taking culture in South Korea (see Statistic Of The Day: This Is Why We Don’t Want Our School Culture To Be Like South Korea’s), The New York Times publishes its own Asian testing story — this one focused on China, Inside a Chinese Test-Prep Factory.

The Washington Post published, as they do every year, my Nine education predictions for 2015. Check it out to see how I’m doing.

Here are some ed-policy related “Best” lists I’ve published during the first part of this year:

The Best Resources On The No Child Left Behind Reauthorization Process