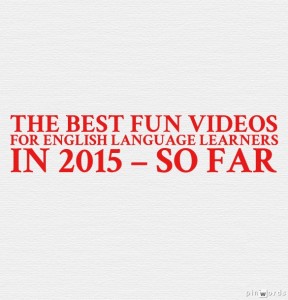 I use short, funny video clips a lot when I’m teaching ELLs, and you can read in detail about how I use them in The Best Popular Movies/TV Shows For ESL/EFL (& How To Use Them). In short, there are many ways to use them that promote speaking, listening, writing and reading.

I’ve posted quite a few of them during the first six months of this year, and I thought it would be useful to readers — and to me — if I brought them together in one post.

I’ve also published quite a few during the previous seven years of this blog. You can find those in these lists:

The Best Movie Scenes To Use For English-Language Development

The Best Videos Illustrating Qualities Of A Successful Language Learner

The Best Sports Videos To Use With English Language Learners

The Best Movie Scenes For Halloween

Okay, now here are my choices for The Best Fun Videos For English Language Learners In 2015 — So Far:

This video has a surprise ending:

“Mr. Line” is a character is a long series of short Italian video animations featuring a long, unbroken, drawn line.

Open Culture blogged about the series, and, except for one (and maybe a few more) that are clearly not appropriate for the classroom, they would be great to show English Language Learners and have them write and talk about what they saw. The character primarily just talks gibberish, and the drawings speak for themselves.

Here’s an example of one (you can access all of them here):

Artoo in Love would be a good video to show English Language Learners and then have them write and talk about what happens in the film:

Here’s a new one:

This would be a fun video to show to English Language Learners and have them describe what they see. It’s in French with with English subtitles, but it’s fun even if you understand the words.

One activity I do with English Language Learners is teach several idioms; then have students use them in sentences of their own creation; and, finally, create literal posters illustrating what they have written.

So, let’s say they write “Please, keep it a secret – don’t let the cat out of the bag!” (note that they use the idiom correctly and include its meaning in the sentence). They would then draw a picture of a cat in a bag with someone talking to another person, along with their caption.

Then, they show it and share it verbally to the class. It can be a lot of fun.

Now, in addition to my drawing a simple model to show to students, I’ll be showing them this wonderful short video called “Confessions Of An Idiom.”

I’ll be adding this post to The Best Sites To Help ELL’s Learn Idioms & Slang.

Confessions of an Idiom from Amanda Koh on Vimeo.

I’ve previously published several posts about having English Language Learners use photos and videos as fun opportunities to invent “thought bubbles” or dialogues. I’ve also published a similar idea in a post titled What Are People In This Painting Thinking?

TED Talks shared a number of short videos they shared at their conference. Some were new, some I had seen and published here, and several would be useful in English Language Learner classes.

Two of those useful for ELLs were from a YouTube channel by Chris Cohen that he calls Animal Translations, where he puts his voice to animal thoughts. The accent is a bit thick, so it might be difficult for ELLs to hear everything, but they’d certainly get the idea. Then, students could create their own internal dialogue they could perform while the video was shown on a screen without sound.

A regular feature on this blog has been highlighting all the games that Jimmy Fallon plays on his show that are great ones for English Language Learners.

He recently played another one that most teachers are familiar with — Pictionary.

Show him playing it with several other stars could be a fun model for students prior to playing the game. When I do it, I model a game in front, and then divide the class into groups of three. Then, in the small groups, everyone gets a chance to be the decider/drawer of the word while they play it three times.

Could We Be Putting Our Students To Sleep — Permanently — With Boring Classes?