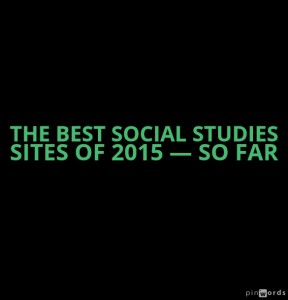 Here are my choices for The Best Social Studies Sites Of 2015 — So Far:

Our World Of Data is a pretty amazing collection of interactive infographics by University of Oxford researcher Max Roser.

I’ve completed updated my U.S. History Class Blog for English Language Learners. It follows the chapter sequence found in Steck-Vaughn’s “America’s Story” textbook, but certainly the sequence would be useful for any U.S. History class.

And here’s our World History Class Blog. It has what I think are the most accessible online resources out there to English Language Learners. Though it specifically follows the chapters in our textbook, Access World History by Great Source (by the way, thanks to Mary Ann Zehr for originally sharing it with me), it pretty much follows the chronology of events that most World History textbooks use.

Channel 4 in the UK has created a 4NewsWall which is a wall of news-related GIFs that connect to summaries about the topic. The GIFs are sized based on their popularity.

The Associated Press has a series of twenty-six short videos describing the forces behind multiple natural disasters.

Vimeo has a great collection of videos in their travel category, and many would be great for Geography classes — assuming Vimeo isn’t blocked by your District’s content filter.

Scaling Everest is a very neat new interactive from The Washington Post.

Wow, you’ve got to check out this interactive map of 6400 languages from around the world. It’s called Langscape, and is from the University of Maryland.

The Problem With History Classes is a thought-provoking article in The Atlantic. It’s perfect for IB Theory of Knowledge teachers, as well as history educators.

Teaching Tolerance is offering a free documentary on the Selma-to-Montgomery march — a perfect follow-up to watching the Oscar-nominated “Selma” film.

Global Trend Tracker shows you the top ten search terms being used in each country around the world. I have a couple of other similar tools on The “All-Time” Best Places To Find The Most Popular (& Useful) Resources For Educators list. One slight advantage that Global Trend Tracker might have over them is that it’s a bit more visual.

“What If?” Projects From My Theory Of Knowledge Class

What the World Will Speak in 2115 is a recent article in The Wall Street Journal.

Eat: The Story Of Food is an impressive interactive from National Geographic. It examines the history, health and future of food with what appears to be an almost endless supply of multimedia features.

Travel By Drone has thousands of videos from around the world that have been made through the use of drones. They’re searchable by geography through a search box, and they are also pins on a map. I learned about it through an article in The New York Times, Seeing the World By Drone.

The Best Resources For Teaching About Selma

Useful Resources For Teaching About #FreddieGray

The Best Classroom Resources On The Potential Iran Nuclear Deal

The Best Resources For The World Day Of Social Justice

The Best Sites For Learning About Susan B. Anthony

The Best Resources On Using Drama In The Classroom

“The Price Of Freedom: Americans At War”

The Best Websites For Learning About Modern & Historical Pirates