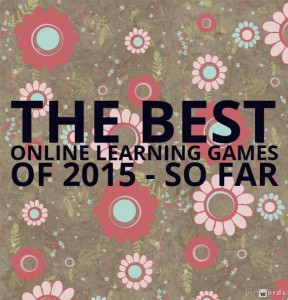 * be seen by me during 2015. So they might have been around prior to this time, but I’m still counting them in this year’s list.

Here are my choices for The Best Online Learning Games Of 2015- So Far:

Sam Chaltain is co-producer of a PBS online series called 180 Days: Hartsville that looks like it’s definitely worth watching. Along with the documentary, Sam and his colleagues have created a “game” called 180 Days: Challenge. In it, you choose the role of a teacher, principal or parent and are then asked ten questions — in effect, problem-based scenarios — that each have very well-thought out potential options as responses. At the end of a game, you’re given a “personalized” analysis based on your answers but, more importantly, a very realistic and sophisticated analysis of how it all fits into the education landscape.

Google Feud would be a super-helpful and fun game for high school English Language Learners if you could be guaranteed of classroom appropriate responses, but that’s never going to happen so it will only be usable in adult classes. You pick a category in the game (culture, people, etc.) and then it gives you a phrase, like “wrestling is.” Then you have to guess the top ten responses that would come up in a Google autocomplete box.

I’ve shared a lot of online “choose your own adventure games” that are engaging for English Language Learners and others (see The Best Places To Read & Write “Choose Your Own Adventure” Stories). Here are two that have recently been created and, even though I suspect students won’t be enthralled by them, nevertheless provide models for teachers to show for student assignments:

Play this game to see what it’s like to be John Boehner is from Vox.

How To Win An Oscar is from The Los Angeles Times.

The Internet Archive has brought over 2,000 MS-DOS games, including the famous Oregon Trail game. In the past, I’ve had students try-out a poor substitute for the class game. It’s called Westward Trail. But now they get to play the original!

Quizzity is an online geography game where you have to choose the city in which a photo has been taken. You can read more about it at Richard Byrne’s blog. I’m adding it to The Best Online Geography Games.

Answer A Question, Plant A Tree