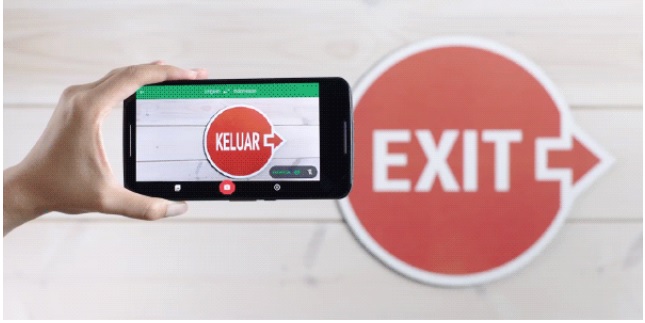 Today, they announced another big update – adding a ton of new languages to the feature that translates images of text, along with what they say are improvements that will make the voice translation ability work better:

We started out with seven languages—English, French, German, Italian, Portuguese, Russian and Spanish—and today we’re adding 20 more. You can now translate to and from English and Bulgarian, Catalan, Croatian, Czech, Danish, Dutch, Filipino, Finnish, Hungarian, Indonesian, Lithuanian, Norwegian, Polish, Romanian, Slovak, Swedish, Turkish and Ukrainian. You can also do one-way translations from English to Hindi and Thai. (Or, try snapping a pic of the text you’d like translated—we have a total of 37 languages in camera mode.)

I’ve embedded a cute video below where they’re showing off using the new languages in the visual mode.

I’ve found the real-time voice translation feature not very workable in classroom situations, but perhaps these new updates will mitigate those problems.

The visual text feature, on the other hand, has come in quite handy for some students. As the video shows, you just set the language of the text you want translated and the language you want it translated into, click the camera icon, point it at the text, and it shows you the translated image. As the video also shows, it works great with large text. It works well with small text when I’m using my iPhone 6, but students have found in the past it doesn’t work nearly as well with lower-end smartphones. I don’t know if this new update will fix that issue or not.

Does Anyone Know What Happened To Voice Of America’s “GoEnglish.me”?