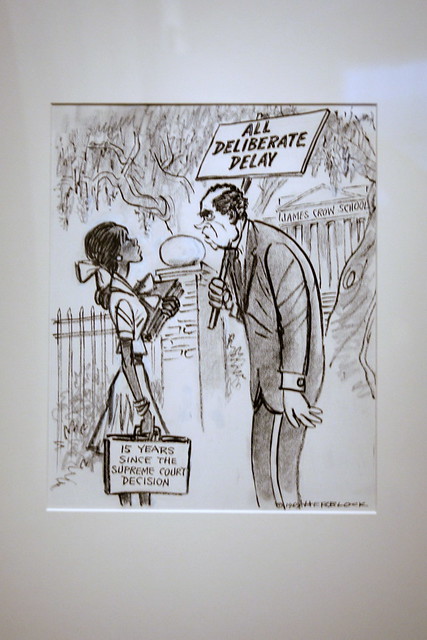 As Sarah Garland from The Hechinger Report recently wrote:

In the fight over how to close the racial achievement gap in education, you rarely hear about the only policy that’s ever worked on a national scale: desegregation.

I thought it would be useful, and important, to begin a related “Best” list, and hope that readers can contribute more suggestions.

The Best Resources For Learning About The “Achievement Gap”

Here’s a few articles to start off with on this new list.  Again, I look forward to reader contributions:

Separate. Unequal. Still. How public school segregation plagues New York City, and why it matters is by Sarah Garland.

The Problem We All Live With is the must-listen to (or must-read transcript) from This American Life, and produced by Nikole Hannah Jones .

Here is how it’s described:

Right now, all sorts of people are trying to rethink and reinvent education, to get poor minority kids performing as well as white kids. But there’s one thing nobody tries anymore, despite lots of evidence that it works: desegregation. Nikole Hannah-Jones looks at a district that, not long ago, accidentally launched a desegregation program.

This Florida School District Is Failing Black Students at a Shocking Rate. That’s Exactly What It Chose to Do. is from Slate.

The Evidence That White Children Benefit From Integrated Schools is from NPR.

The end of public school desegregation? is from The Washington Post.

How Segregated Schools Turn Kids Into Criminals is from The Washington Post.

The Secret to School Integration is from The New York Times.

When Integrating A School, Does It Matter If You Use Class Instead of Race? is from NPR.

Statistic Of The Day: “Systemic Economic & Racial Isolation” For Many Of Our Students

When Integrating A School, Does It Matter If You Use Class Instead Of Race? is from NPR.

Can Charlotte-Mecklenburg Desegregate Its Schools … Again? is from The American Prospect.

When School Districts Get Deliberate About Desegregation is from The Atlantic.

On the anniversary of Brown v. Board, new evidence that U.S. schools are resegregating is from The Washington Post.

Changing The Narrative: Leveraging Education Policy To Address Segregation is from The Shanker Institute.

Recycling Poverty, Segregated Schools, and Academic Achievement: Then and Now is by Larry Cuban.

New report is ‘huge warning sign’ that desegregation has failed in US schools is from The Guardian.

Jeff Sessions’ Other Civil Rights Problem is from The New York Times.

Bridging The Divide is a big report from The Baltimore Sun on school segregation.

How The Systemic Segregation Of Schools Is Maintained By ‘Individual Choices’ is from NPR.

School segregation didn’t go away. It just evolved. is from Vox.

Black plaintiffs in Alabama appeal decision to allow white city to secede from its school district is from The Washington Post.

Efforts to ‘raise the bar’ for becoming a teacher are running headlong into efforts to diversify the profession. Now what? is by Matt Barnum.
The Resegregation of Jefferson County is from The NY Times.

A Chat With MacArthur Genius Nikole Hannah-Jones is from The New York Times.

Are Private Schools Immoral? A conversation with Nikole Hannah-Jones about race, education, and hypocrisy. is from The Atlantic.

Why Are American Public Schools Still So Segregated? is from KQED.

Is School Desegregation Coming to an End? is from The Atlantic.

The data proves that school segregation is getting worse is from Vox.

School Segregation Is Not a Myth is from The Atlantic.

“Sitting a black child beside a white child doesn’t mean the black child will get smarter. It means that we are guaranteeing the kind of education for black students that we guarantee for white students.” @nhannahjones

Brown v. Board of Education ended school segregation. So why are schools still not integrated? is from NBC News.

Can Richard Carranza Integrate the Most Segregated School System in the Country? is from The Atlantic.

2. Nobody who has studied this issue believes there is something magic about seating white/middle-class kids next to non-white/poor kids. But advantaged children come with: PTA funding, the political power and social connections of their parents, and effective teachers.

This picture signaled an end to segregation. Why has so little changed? is from The Guardian.

What You Can Do in the Face of School Segregation is from Ed Week.

WOW! CHECK OUT PROPUBLICA’S “MISEDUCATION: IS THERE RACIAL INEQUALITY AT YOUR SCHOOL?”

The Persistence Of Segregated Schools is from Public Radio.

Segregated Neighborhoods, Segregated Schools? is an interactive from The Urban Institute.

More affluent neighborhoods are creating their own school districts is from Vox.

The Other Segregation appeared in The Atlantic.

‘Threatening the Future’: The High Stakes of Deepening School Segregation is from The NY Times.

The Persistence of Racial Segregation in American Schools is from Facing History.

‘Do You Support Busing?’ Is Not the Best Question is from The NY Times.

Segregation has soared in America’s schools as federal leaders largely looked away is from The L.A. Times.

As Democrats Debate Busing and Segregation, Six Things You Need to Know is from Ed Week

What school segregation looks like in the US today, in 4 charts is from The Conversation.

Where Segregation Persists, Trouble Persists is from The NY Times.

How segregation keeps poor students of color out of whiter, richer nearby districts is from Vox.

School segregation worsens for Latino children compared with a generation ago is from Eureka Alert.

The Washington Post has published a series on school segregation:

How the nation’s growing racial diversity is changing our schools

The changing face of school integration

Where Civility Is a Motto, a School Integration Fight Turns Bitter is from The NY Times.

California’s schools are among the most segregated in U.S. What can be done about it? is from The Sacramento Bee.

Research Shows Diverse Classrooms Improve Learning For Everyone is from MindShift.

The lines that divide: School district boundaries often stymie integration is from The Washington Post.

What long-run effects did school desegregation/busing have on students?

Why School Integration Matters is by Pedro Noguera.

Five myths about school segregation is from The Washington Post.

Quote Of The Day – On School Desegregation

The long-run impacts of Mexican-American school desegregation is from Brookings.

Sixty-eight years after Brown v Board of Education, U.S. schools remain highly racially and economically segregated. The Segregation Index, developed by researchers at the GSE and @USCPriceCSI, points to the urgent need to equalize educational opportunity. https://t.co/x6q6c0FzZC

US schools remain highly segregated by race and class, analysis shows is from The Guardian.

New Video From L.A. Times: “Do you know what a charter school is?”