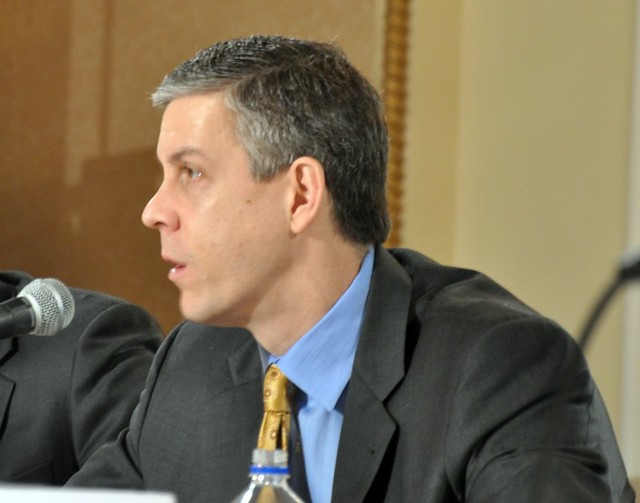 I thought it would be useful to begin collecting useful commentaries about his departure and legacy.

For what it’s worth, here’s my own “take” via a tweet and a short comment I sent Ed Source when they asked me what I thought:

How often do Ed secretaries & supts depart and leave us teachers to clean up the messes they leave behind?

I think California schools are in a position to make huge strides in spite of former Secretary Duncan’s attempt to get the state to march in step with his off-tempo drumbeat. His refusal to support the state’s waiver requests, and his subsequent encouragement of a waiver request by districts done without the support of local teachers, indicate how out of touch he has been with what effective school improvement efforts really look like. It’s important to note that Mr. Duncan has had nothing to do with what is arguably the most important school reform effort being done in the country today – Governor Brown’s transformation of school funding,

And now, for a beginning collections of commentaries from others:

Arne Duncan, Education Secretary, to Step Down in December is from The New York Times.

If you thought Arne Duncan was controversial, meet his successor is from The Washington Post.

The Education Secretary’s Greatest Hits is from NPR.

U.S. education secretary who clashed often with California to resign is from Ed Source.

Obama vs. teachers unions: It’s still on is from Politico.

What Arne Duncan did to American education and whether it will last is from The Hechinger Report.

Here We Go Again: Private Foundations Have A Place (And Have To Be Kept In Their Place)

Statistic Of The Day: A Lot Of Teachers Are Quitting The Profession

“Teachers Unions ‘Must Claim the Mantle of Educational Leadership'”