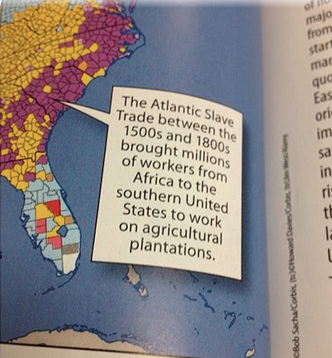 I’m amazed at some of the incredibly dumb things that supposedly very smart people do sometimes, and McGraw Hill’s terrible mistake in a Texas history textbook (see the above screenshot) falls into that category. Of course, in addition or instead of “dumb,” it might also have been an intentional attempt at “revisionist” history.

I also think it offers an excellent opportunity for using the controversy with students to discuss who writes history and for what purpose.

Here are some resources on what has happened:

McGraw-Hill Education CEO Says It Has Done Enough To Fix Its Description Of Slaves As ‘Workers’ is from The Huffington Post.

Texas: Publisher Offers Stickers to Cover Erroneous Caption is from the NY Times.

What’s wrong with this picture? is from Marginal Revolution. It offers some useful facts, but also some strange commentary. I think the commentary could provide some good classroom discussion points: Which is worst? Racism or other factual errors.

Texas, Textbooks and Truth is from Teaching Tolerance.

Some Texas school leaders brush off complaints about textbooks that call slaves ‘workers’ is from The Washington Post.

Texas Mother Teaches Textbook Company a Lesson on Accuracy is from The New York Times.