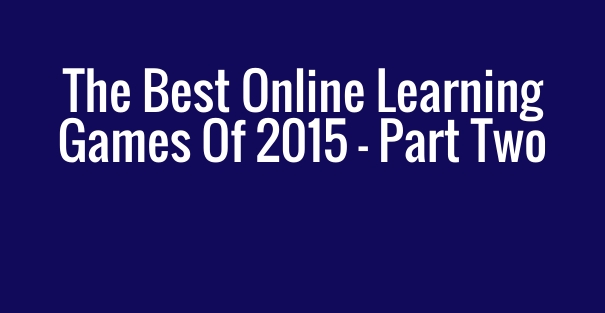 * be seen by me during the second part of 2015. So they might have been around prior to this time, but I’m still counting them in this year’s list.

Here are my choices for The Best Online Learning Games Of 2015- Part Two:

Quizalize recently announced a new feature that I think deals with that problem — now students are automatically grouped in teams and the teams compete against each other, plus students see how their teams are doing. This is how I typically organizing learning games in the classroom, and I think it’s simple, yet ingenious, that Quizalize figured out how to do it automatically online. I’m now adding both Quizizz and Quizalize to The “All-Time” Best Online Learning Games.

As regular readers know, I’m a fan of using online Escape The Room games as language-development exercises for English Language Learners. You can see articles I’ve written about it, as well as links to some of my favorite games, here. I’ve even posted about an online tool that lets you create your own Escape The Room games. I hadn’t thought these games could have any other academic purpose – until recently. Kelly Tenkely wrote a post about how one Escape The Room game called Scientific Detectives: Training Room Escape is used to teach scientific reasoning. I think it’s pretty ingenious, especially if it’s paired with students creating their own using the game-creator I mentioned earlier in this post.

You an play lots of simple online educational games at Tiny Tap. You can create them, too, but for that feature you have to use their iPhone/iPad app – the games are playable on computers or mobile devices. For a monthly cost, teachers can create virtual classrooms and monitor student progress, but everything else seems to be free.

Thanks to Jim Bentley, I learned about Karen Ogen‘s nice collection of learning games called Interactive Sites For Education. I’m adding it to The Best Collections Of Online Educational Games.

The BBC’s “Skillwise” site has a great collection of English games that would be accessible to Intermediate and Advanced English Language Learners.

Playbuzz lets you create a variety of online games and quizzes very easily – for free. You can embed them, too. The only problem is that anybody can create them and, though I didn’t see any objectionable ones after taking a quick look, I’ve got a suspicion that some District content filters might block the site.

A couple of years ago, I posted about a new site called BrainRush. It was just beginning then, and lets you created flashcard learning activities. Those, of course, are a dime-a-dozen. But what made BrainRush different was that you could create virtual classrooms and monitor student progress in mastering them. Plus, they said they would be adding more activities in the future. And, most importantly, it was free. I recently checked the site again. I saw that they have indeed added the kinds of activities you can create. Now, in addition to flashcards, you can develop sequencing activities, Buckets (a categorization interactive) and “hotspots” (a naming/placing tool). They all look good, as does the price 🙂

I was searching online to find simple tools for making online matching games (the ones that, for example, have questions on the left and mixed-up answers on the right) and was pleasantly surprised to find the SuperTeacherTools site. Not only does it let teacher and students create these kinds of matching games without having to register and very easily, it also has other game-making features. Here’s a quick one I did on a growth mindset. There were a few others, including Eduplay, but SuperTeacherTools was by far the best one.

Here are two other recent additions to The Best Websites For Creating Online Learning Games:

eQuiz Show lets you easily create online Jeopardy-like games without requiring registration. There are already a number of similar tools on the list, but you can never have too many because who knows what School District content filters will block and what they will let through.

Thanks to Alison Rostetter, I learned about Teachers-Direct. They have two styles of games you can create without registering. One is called Quiz-Busters. The other is sort of interesting. I’m not a big fan of Word Searches, and view them as basically busy work. At this site, you can create a Word Search – with a twist. Instead of listing the words students have to find, you list sentences with a blank and the students have to come up with the word and find it. I wouldn’t spend any teacher time on creating one, but I could see having students use it to create ones for classmates to play now-and-then.