Many readers have probably followed the recent story out of Texas where a textbook referred not to slaves, but to “workers” (see The Best Posts & Articles On The Textbook That Calls Slaves “Workers”).

Yesterday, The New York Times published a column headlined How Texas Teaches History. I bookmarked it to read this weekend, and figured it was another article on that recent controversy.

Ted Appel, our former principal and now leader in our District, suggested I read it sooner rather than later, and I’m glad I did.

It provides a fascinating in-depth analysis of how grammar is used in textbooks to manipulate historical meaning.

You can see all this at play in the following passage from a textbook, published by Houghton Mifflin Harcourt, called Texas United States History:

“Some slaves reported that their masters treated them kindly. To protect their investment, some slaveholders provided adequate food and clothing for their slaves. However, severe treatment was very common. Whippings, brandings, and even worse torture were all part of American slavery.”

Notice how in the first two sentences, the “slavery wasn’t that bad” sentences, the main subject of each clause is a person: slaves, masters, slaveholders. What those people, especially the slave owners, are doing is clear: They are treating their slaves kindly; they are providing adequate food and clothing. But after those two sentences there is a change, not just in the writers’ outlook on slavery but also in their sentence construction. There are no people in the last two sentences, only nouns. Yes, there is severe treatment, whippings, brandings and torture. And yes, those are all bad things. But where are the slave owners who were actually doing the whipping and branding and torturing? And where are the slaves who were whipped, branded and tortured? They are nowhere to be found in the sentence.

In addition to being an eye-opening read for me, it will be a great one for my IB Theory of Knowledge classes….

Here’s how the column ends: 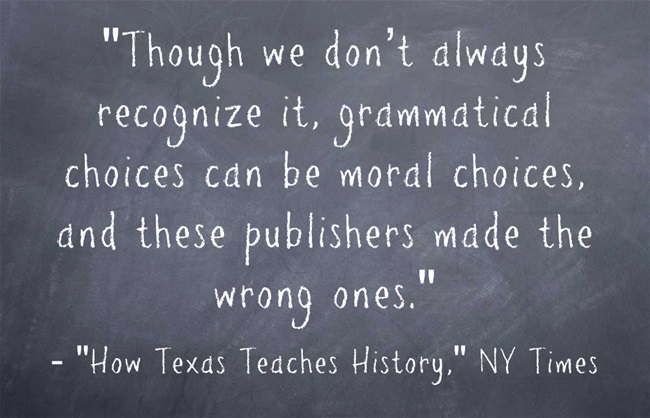 Resources On The Hajj