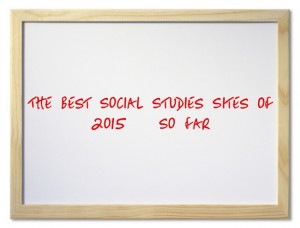 Here are my choices for The Best Social Studies Sites Of 2015 — Part Two:

Densho (a Japanese term meaning “to pass on to the next generation”) is an incredible website that offers an enormous amount of resources useful for teaching and learning about the internment of Japanese during World War II. It’s apparently been around for quite awhile, but I recently learned about it through an article in NBC News, Digital Project Aims to Preserve Stories of Incarcerated Japanese Americans. I’m adding it to The Best Resources On Japanese Internment In World War II.

Histography basically puts most history related articles in Wikipedia on an interactive chronological timeline that’s also divided into categories. It’s incredibly cool, but I suspect it’s going to be too overwhelming to use in my most classrooms, but let me know if you think I’m wrong.

37 maps that explain how America is a nation of immigrants is a great collection from Vox.

ReadWorks.org has a zillion free reading passages available for download and in many subjects. They come with comprehension questions, but I wouldn’t use them. The passages themselves, however, are rated by reading level, and could be very useful for English Language Learners – particularly in Social Studies. I could use them with students to help them develop knowledge preceding their beginning a more complex text on the same topic, or use them to supplement content in our ELL history books. It would also be easy to modify their reading passages into clozes or other reading exercises.

The Early Warning Project is a useful new site for the classroom – and an important site for the entire world. It’s a joint project of the United States Holocaust Memorial Museum and Dartmouth College. It:

measures, tracks, and analyzes known risk factors that could lead to a future instance of mass atrocities. The data, along with real-time analysis from regional and genocide experts, generate a forecast.

It has an interactive map, along with accessible data visualizations and narratives providing in-depth analysis of current situations in high-risk countries. You can also read more about it in the Associated Press story, Holocaust museum tool aims to predict, prevent mass killings.

After The Storm is an impressive multimedia interactive from The Washington Post and PBS Independent Lens. It’s about the coming – and aftermath – of a tornado. I’m adding it to The Best Resources For Learning About Tornadoes.

I’ve been sharing resources about the present refugee crisis and adding them to The Best Sites For Learning About World Refugee Day. Here are two new interactives that share images of refugees throughout the years:

Refugees in Europe – then and now is from The Guardian.

Great uprootings: Photographs of the world’s most massive migrations is from The Washington Post.

I’ve previously written a lot about how much I like SAS Curriculum Pathways, a free site with tons of interactive lessons that students can complete and then email to their teacher. It’s just gotten even better….They unveiled a big upgrade to the design of their site, and it looks great. Secondly, they have a nice new feature called Explore Primary Sources, which provides lots of creative lessons for students to access…primary sources.

The recent public attention to the Confederate flag has prompted some people, to the amazement of many of us, to claim the Civil War was not caused by slavery. This new video (which I learned about through Vox) features the head of the History Department at West Point and, for any reasonable person, will be the last word on this subject. You can access the written transcript here. Interestingly, Prager Univeristy, which puts out this video and others, appears to be an extraordinarily conservative ((based on their other videos) group. I’m adding the video to The Best Sites For Learning About The American Civil War.

Zoom In! is a new(er) free site that provides some very good U.S. History lessons that use historical documents and are standards-based. Along with in-class instruction, students use the online resources to do close-reading and scaffolded written responses. Teachers create online virtual classrooms where they can monitor student progress.

Two of their features standout to me:

First, they clearly have been very intentional about choosing primary source documents that are likely to be more accessible to students and then have made them even more accessible with their lay-out and easy ability to look-up word definitions. I haven’t really seen any other site that has been able to do this anywhere near as well as Zoom In!

Secondly, I really like the way they scaffold the writing of written responses/essays. Again, more sites could learn from them.

The Best Online Tools That Can Help Students Write An Essay

Out Of Eden Learn is is an amazingly creative project from Project Zero at Harvard. It’s done in association with a seven year walking trek by journalist Paul Salopek who is walking 21,000 miles to retrace the history of human migration from Africa. His journey is sponsored by National Geographic.

In the free Out of Eden Learn platform, teachers create virtual classrooms where they can monitor their students progress during a twelve week program (which can be followed, if desired, by another twelve week program — the project is developing ideas for future ways students can continue connecting). During those times, there are what seems to me to be pretty creative learning activities that students do, including interacting with other classes in other geographical locations.

I’ve got to say that whoever created this program has got to have an incredibly creative mind.

The Declaration Project collects all the world’s declarations of independence. Here’s how it describes itself:

The Declaration Project is an interactive site that features a comprehensive collection of declarations of independence and kindred declarations crafted in the U.S. and the world over. While the ‘Declaration Collection’ component of this project is a centerpiece, there are two other key parts to this initiative: ‘My Declaration™‘ gives you the opportunity to compose and post your own declaration, and for others to respond to it. And the ‘Spirit of ’76 Cafe™’ features ongoing participatory explorations of the themes that resonate in our July 4, 1776 Declaration of Independence and others included here .

I’m not sure how useful the last two parts are really going to be to teachers or students, but the collection itself could be very helpful.

And here are Social Studies-related “Best” lists that I’ve published over the past few months:

The Best Resources For Learning About Juneteenth