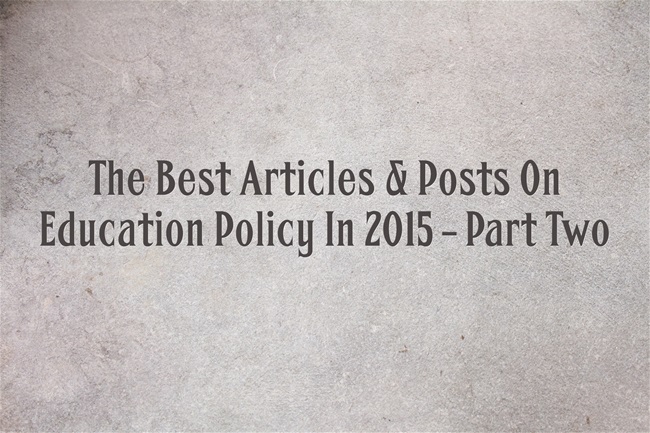 Here are my choices for The Best Articles & Posts On Education Policy In 2015 – Part Two (let me know what you think I’m missing) – these are not listed in any order of preference:

‘Forced busing’ didn’t fail. Desegregation is the best way to improve our schools. is the headline of a Washington Post column by Syracuse University professor George Theoharis seems to me to be a “must-read” for everyone.

The Best Resources Showing Why We Need To Be “Data-Informed” & Not “Data-Driven” is one of my more popular “Best” lists. Ted Appel, our former principal who is now in charge of professional and leadership development for our district, shared a NY Times article that is more fodder for that list. It’s headlined College Rankings Fail to Measure the Influence of the Institution and discusses the recently released College Scoreboard from the Obama administration.

Thanks to Kelly Gallagher, I learned about a brand-new report from America’s Promise Alliance on the reasons why students drop-out of high school. They surveyed 2,000 students who took at least one semester off from school. Tech Insider took the information and created a chart of the results (their chart is more accessible than the one in the report itself). You can see the entire chart here, and I’ve done a screenshot of the reasons that were at the top.

The Data Are Damning: How Race Influences School Funding is an Atlantic article that offers depressing, but not surprising, information.

The Problem We All Live With is the must-listen to (or must-read transcript) from This American Life. Here is how it’s described:

Right now, all sorts of people are trying to rethink and reinvent education, to get poor minority kids performing as well as white kids. But there’s one thing nobody tries anymore, despite lots of evidence that it works: desegregation. Nikole Hannah-Jones looks at a district that, not long ago, accidentally launched a desegregation program.

Politics K-12 over at Education Week published Accountability and the ESEA Reauthorization Deal: Your Cheat Sheet.

The New York Times  published a review of a new book on the school reform fiasco in Newark, New Jersey titled The Prize: Who’s in Charge of America’s Schools? I’ve previously posted about the excellent article the author, Dale Russakoff, wrote about Newark for The New Yorker, which she obviously then expanded and turned into this book.

In the always must-read EduShyster blog, guest Amy Berard writes about her humiliating teaching experience last year wearing an earpiece and being told what to do by three trainers in the back of her classroom with a walkie-talkie.

How One Law Banning Ethnic Studies Led to Its Rise is from The Atlantic. It demonstrates the old organizing adage that your opponent does your best organizing for you…

Frank Bruni wrote a New York Times column  that pretty much summarizes good policy changes that could be made to enhance the attractiveness of the teaching profession: higher salaries, a career ladder, a career ladder, a voice in policy decisions and more.

NPR published an impressive multi-state series on high school graduation rates. You can see all of their grad stories here.

John Merrow, who recently retired from being the PBS News Hour education correspondent, went out with a bang in his final segment titled Is kindergarten too young to suspend a student? (see the transcript at the link). It’s an amazing piece on the practices of the New York City-based Success Academy charter network. All I can say is just watch it:

I’m going to throw in three of my posts here at the end of the list:

Growth Mindset – Don’t Throw The Baby Out With The Bathwater

Yes, Schools Should Develop Active Citizens &, No, We Don’t Need Another Test To Do It

Teachers: What we want everyone to know about working in our high-needs school is the headline of a guest column three of my colleagues – Katie Hull, Dana Dusbiber, Lara Hoekstra – and I wrote for The Washington Post. It describes what it’s like to work in our high school…

The Best Posts, Articles & Videos On The Rafe Esquith Controversy

The Best Articles & Posts About The “Teacher Shortage”

The Best Resources On The Awful Friedrichs Case

The Best Posts & Articles About “Erase To The Top”