Another Study Shows Limitations Of Standardized Tests For Teacher Evaluations

I want to highlight one of those posts in particular – More Evidence Showing The Dangers Of Using High-Stakes Testing For Teacher Evaluation. That post highlighted a study by C. Kirabo Jackson. Here’s how I described it:

His study considers the widespread research that non-cognitive skills like self-control and perseverance have been shown to have as great an impact, if not a greater one, on long-term success than cognitive skills. Given those findings, he looks at how teachers who have generated high and low student test results have done in generating positive student outcomes in those non-cognitive skills (which he measures by “student absences, suspensions, grades, and grade progression”).

He showed that “a teacher’s effect on non-cognitive skills is essentially missed by her effect on test scores.”

Now, a new study using data from the Gates Foundation MET study (though I and others have big questions about that study’s results, other researchers have begun to make effective use of its raw data and coming up with very different conclusions) has developed similar results.

Teaching for Tomorrow’s Economy? Teacher Effects on Complex Cognitive Skills and Social-Emotional Competencies is from Matthew Kraft at Brown University and is not behind a paywall.

Here’s an excerpt from the abstract: 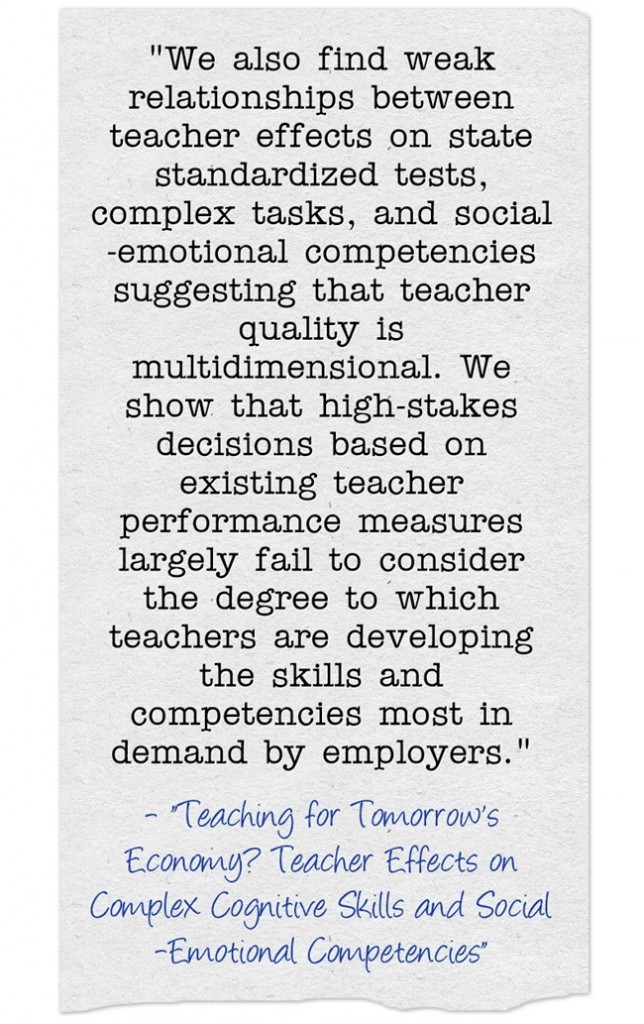 The study uses different types of data than Jackson did to come to these conclusions (results from taking Duckworth’s grit tests, a growth mindset scale, and self-reported information, among others). I’d have a little more faith in the criteria Jackson used, but I’m speaking as a layperson and could not vouch for their respective reliabilities.

Here’s a longer excerpt from the new study, which I have to admit I didn’t read all the way through (it’s a 38 page narrative plus an equal number of supporting pages):

Comparing the effects of individual teachers across these outcomes reveals that teachers who are most effective at raising student performance on standardized tests are not consistently the same teachers who develop students’ complex cognitive abilities and social-emotional competencies. While teachers who add the most value to students’ performance on state tests in math do also appear to strengthen their analytic and problem-solving skills, teacher effects on state ELA tests are only moderately correlated with open-ended tests in reading. Effectively teaching more basic reading comprehension skills does not appear to translate consistently to the ability to interpret and respond to texts. Furthermore, teacher effects on social-emotional measures are only weakly correlated with effects on state achievement tests and more cognitively demanding open-ended tasks, even after adjusting for differential reliability in the measures. These findings suggest that teacher effectiveness differs across specific abilities.

I also thought it was interesting, and useful, that the study pointed out the desire by employer for the kind of skills the standardized tests were not doing a good job of measuring:

In a 2014 survey of260 large commercial firms, corporate leaders identified both problem-solving skills and a strong work ethic as being among the most important attributes they were seeking in job candidates (National Association of Colleges and Employers 2015). However, the degree to which teachers are developing students’ abilities to apply knowledge in new contexts, learn on the job, and solve unstructured tasks through a combination of creativity, adaptability, and sustained effort remains an open question.

The Happiness Factor: Research Moves Beyond Test Scores to Find Strongest Teachers is from The Seventy Four and covers this study and others.

The Best Articles, Videos & Posts On Education Policy In 2019 – Part One

Even More On The Next Generation Of State Tests