It basically seems to confirm years of prior research about the dangers of extrinsic motivation (see The Best Posts & Articles On “Motivating” Students), but with a few new-to-me twists. The paper is a little confusing to a layperson like me, but I’m fairly confident my understanding is correct (though I’m happy to have others more knowledgeable correct me if I’m inaccurate in any way!).

I was particularly intrigued by the fact that, though the researchers develop some universal conclusions about learning, their specific experiment used learning words of a new language as its focus. They found that those who received rewards for doing well in a test studying these new words did worse in immediate and delayed testing: 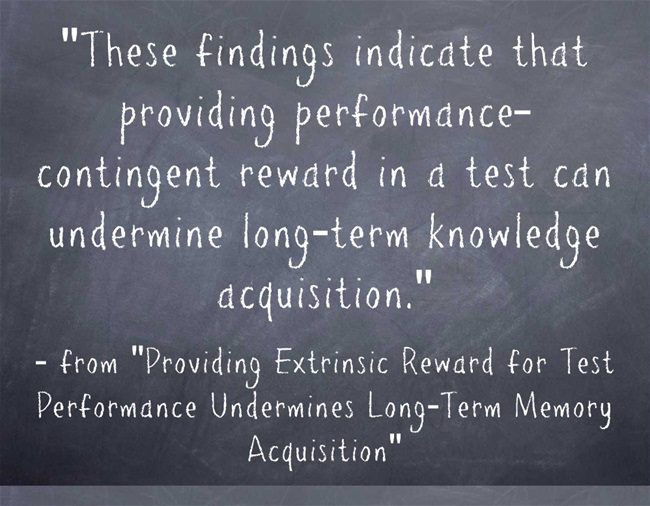 They go on to say:

Such an effect is consistent with findings showing that the quality of learning differs depending on motivational state. Compared to intrinsic motivation, extrinsically motivated learners show a less elaborative learning style characterized by more passive and less effortful learning that vanishes beyond the point of being rewarded or punished.

Again, all this, so far, seems to reinforce prior research about the extrinsic and intrinsic motivation, with the intriguing (to me, at least) feature that the experiment used language-learning as the experiment.

But there is an additional part of the study worth talking about — its comments on testing. There has been a lot talk, and much research, on the value of retrieval practice, also known as testing, as a learning strategy.

The researchers say that, yes, that might very well be the case. However, they go on to say, just make sure they are low-stakes assessments because high-stakes extrinsic motivation can cancel out the learning benefits of testing.

New Collection Of Studies About What Works In Long-Distance Education