In addition, I have been a vocal critic of SEL “over-reach” (see The manipulation of Social Emotional Learning).

One California example of this kind of over-reach is the effort by a group of California school districts to somehow measure Social Emotional Learning for school accountability purposes. I’ve written a lot about this group of districts – The Best Posts & Articles On The NCLB Waiver Given To Eight California School Districts (Including Ours). Yes, our district was one of the original members, but we were successful in getting it to withdraw. In fact, most of the teachers unions in those districts opposed participation, but were over-ruled by the School Boards.

This over-reach by the remaining districts is highlighted today in a New York Times article headlined Testing for Joy and Grit? Schools Nationwide Push to Measure Students’ Emotional Skills.

Here’s the “money quote” from the piece: 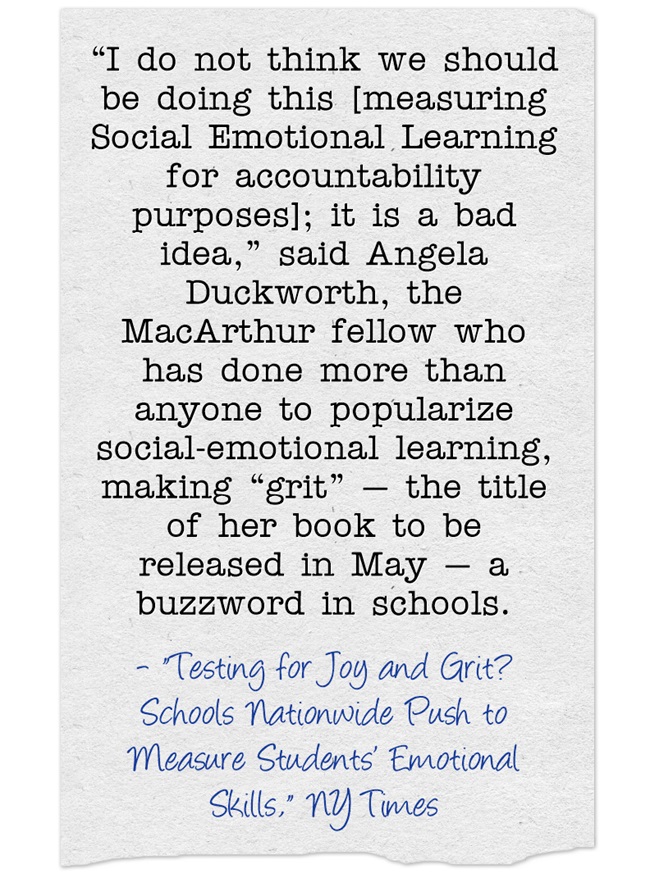 The article goes on to say:

She [Duckworth] resigned from the board of the group overseeing the California project, saying she could not support using the tests to evaluate school performance.

And here’s a tweet she sent out about it:

You can use the Grit Scale for research, reflection, and low-stakes feedback…but not accountability…https://t.co/Fm9OT1laDg

Unfortunately, there’s a long history of people in education taking useful ideas and strategies and, instead of being happy with them as just another useful addition to help our students, they make them in bludgeons to use against educators, schools, students and their families.

Let’s not have the same thing happen to SEL…

Halfway Done On Sequel To “Helping Students Motivate Themselves”

The Best Resources For Learning About Retrieval Practice