Professor Carol Dweck has been speaking and writing about what she considers as misuse of the growth mindset concept (you can see links to those articles hear the bottom of The Best Resources On Helping Our Students Develop A “Growth Mindset.”

Earlier this week, in an article (Growth mindset doesn’t promise pupils the world) at TES, British education website, she made what seems to me to be her most strongly-worded caution to-date: 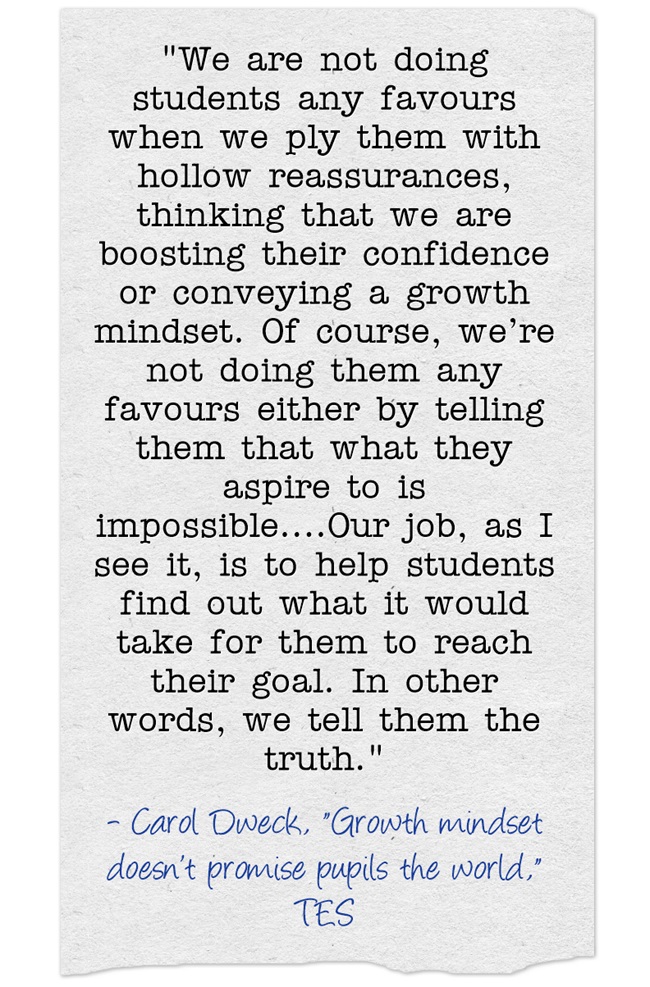 Unfortunately, though, she did it in the context of challenging the work of Anders Ericsson, who has done the groundbreaking research on the concept of deliberate practice (see The Best Resources For Learning About The 10,000 Hour Rule & Deliberate Practice).

Listen, I don’t think you’ll find many others who admire and apply Professor Dweck’s work more than me (even though I have critiqued it on occasion – see Our Students Are Not Supermen & Superwomen and The Limits To The Power Of A Growth Mindset (& The Dangers When We Don’t Recognize Them).

However, even though I welcome her recent comments, by challenging Ericsson, I think she might be making the same mistake that she’s criticizing people for making with her own work through misinterpretation.  In the TES article, she claims that Ericsson (along with Benjamin Bloom — though I obviously know about his taxonomy, I don’t think I’m familiar with his work that she’s criticizing) “believe that almost anyone could do almost anything.“

As I wrote in a previous post, titled Deliberate Practice & Red Herrings, I wrote:

What do you think?  Am I the one misinterpreting Ericsson?

What I’m Reading This Summer