Quote Of The Day: Power As Autonomy

The Atlantic published an article today (People Want Power Because They Want Autonomy) about a new study suggesting that often people desire power not primarily because they want to influence others but, instead, because they want autonomy in their own lives — they want to be able to able to feel like they can control their circumstances and do what they want to do. 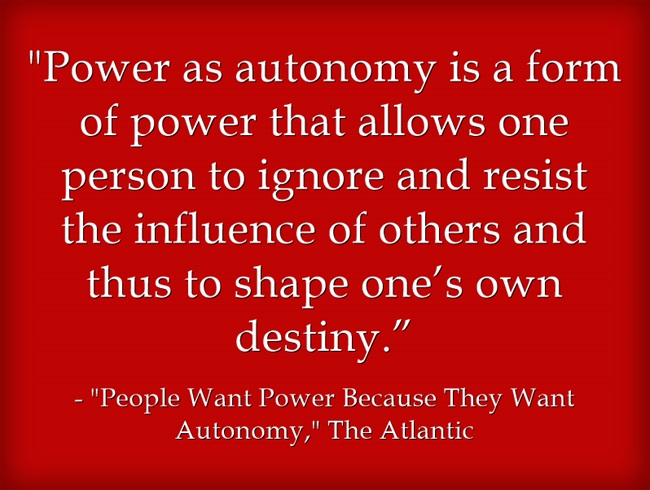 This makes sense to me, and is interesting, though I’m not sure how important this finding is in the broader world.

Based on my nineteen-year community organizing career, we always taught the Latin roots of the word “power,” which mean “the ability to act.” That definition obviously points to autonomy. Of course, in the political arena, many people can’t gain this kind of autonomy without first gaining influence through the use of political power, which we defined as either organized money or organized people.

The study is, though, I think, a reminder to those of us in the classroom about the importance of creating the conditions for student autonomy.

I’ve written about this before:

The Power of Choice, where I discussed a report titled “Power and Choice Are Interchangeable: It’s All About Controlling Your Life.”

Choice Equals Power: How to Motivate Students to Learn, which is a quasi-interview with me that appeared in MindShift.

The Best Posts & Articles About Providing Students With Choices