As was expected by many legal experts, the terrible Vergara decision removing job protections for teachers was overturned today by a California appeals court.

You can read about it in this L.A. Times article, Appeals court rejects bid to end teacher tenure in California, marking a major victory for unions.

Here’s an excerpt from that article: 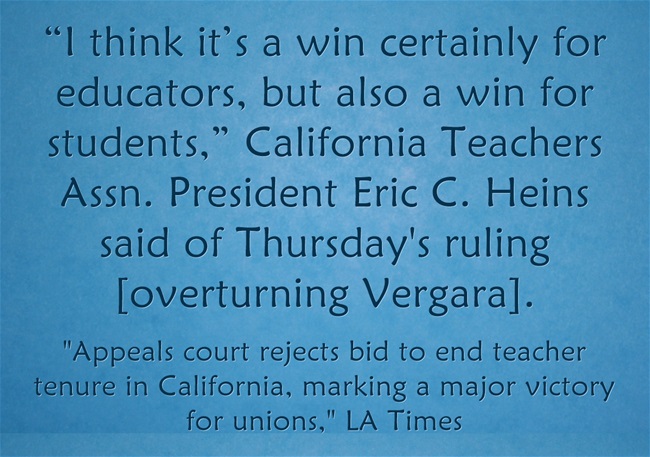 You can read more about the case at The Best Resources On California Court Case Attacking Teacher’s Rights.

This has not been a good time for right-wing billionaires attacking education.  First, they lost on the Friedrichs case at the Supreme Court (see The Best Resources On The Awful Friedrichs Case) and now Vergara gets overturned.

They’re still hoping, though, since yesterday they filed suit to overturn teacher tenure laws in Minnesota (see Teacher Tenure Is Challenged Again in a Minnesota Lawsuit in the NY Times).

Community organizers know that you generally file a lawsuit only when you know you’ve essentially lost a campaign and want to put a better public face on defeat. It looks like opponents of teachers, students and their families are learning this same lesson, too.