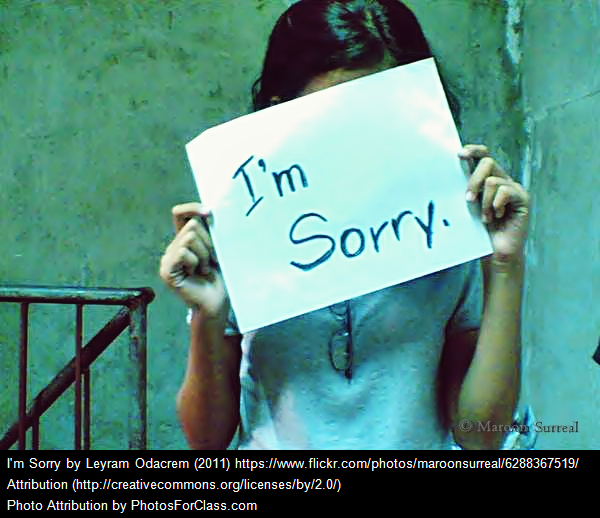 I’ve written a fair amount about the importance of teachers apologizing to students, both for modeling and relational purposes (see The Best Resources On The Importance Of Saying “I’m Sorry”).

A new study has been released that pretty much reinforces previous research, but it’s still interesting.

Here’s an excerpt from Science Daily about the results:

In two separate experiments, Lewicki and his co-authors tested how 755 people reacted to apologies containing anywhere from one to all six of these elements:

2. Explanation of what went wrong

The research is published in the May 2016 issue of the journal Negotiation and Conflict Management Research. Lewicki’s co-authors were Robert Lount, associate professor of management and human resources at Ohio State, and Beth Polin of Eastern Kentucky University.

While the best apologies contained all six elements, not all of these components are equal, the study found.

“Our findings showed that the most important component is an acknowledgement of responsibility. Say it is your fault, that you made a mistake,” Lewicki said.

The second most important element was an offer of repair.

“One concern about apologies is that talk is cheap. But by saying, ‘I’ll fix what is wrong,’ you’re committing to take action to undo the damage,” he said.

The next three elements were essentially tied for third in effectiveness: expression of regret, explanation of what went wrong and declaration of repentance.

The least effective element of an apology is a request for forgiveness. “That’s the one you can leave out if you have to,” Lewicki said.

You can also read an article about about it in The Telegraph.

The Value In Being Bilingual or Multilingual

Our Students Are Not Supermen & Superwomen