What Does The Trump Campaign Teach Us About The Limitations Of The Common Core Standards?

As educators know, the Common Core Standards place a heavy emphasis on evidence and logic in the context of “argument,” as contrasted with the emotion of persuasion.

Here’s what we write about it in our new book, Navigating The Common Core with English Language Learners:

Argument is given great weight in the Standards. The idea is that students will first read a text or texts, examine the writer’s explanations and points, and then – and only then – develop a claim which they will then back-up with text-based evidence (Common Core State Standards for English, n.d., p. 23), as well as acknowledge opposing positions and present counter-arguments. The Standards place great stock in the importance of this kind of rational based approach, which the writers of the Standards contrast with the emotional sway of “persuasion” (Common Core State Standards for English, n.d., p. 24). They say that persuasion also often relies on other less “logical” strategies like using the authority of the writer of the text or appealing to the audience’s sense of identity or self-interest. Experience in producing evidence-based arguments, say the Standards, is what will truly prepare our students for college and career.

Based on our own experience, we believe that emotion – for good or bad – is a key element of how many arguments are made in the world. It would be nice if completely rational ones all carried the day, but that is how things work in the world as we’d like it to be, not in the world as it is. We do tell our students that logic should be the guide for most academic and professional writing. We also tell them, however, that emotion can have an important place in other writing arenas, and it just has to be kept in its place, as well.

A recent piece in The New Yorker highlights the limitations that a laser-like focus on the rational “moneyball” approach the Standards seem to advocate. Here’s an excerpt from The Anti-Moneyball Election: 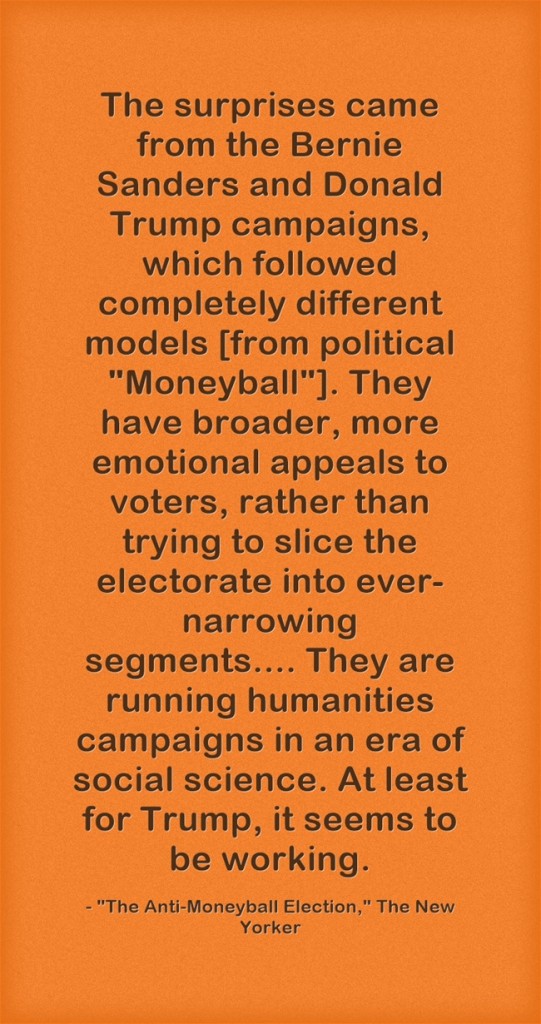 I just hope that educators, and our supervisors, keep in mind the limitations, as well as the advantages, the Common Core Standards bring…

My Summer Plans & How They Will Affect This Blog