At the same time, however, teaching SEL skills to students isn’t enough because of broader soci-economic issues (see The Best Articles About The Study Showing Social Emotional Learning Isn’t Enough).

We also need to recognize that many of our students actually have a lot of the skills traditionally considered in Social Emotional Learning, such as “grit,” in other aspects of their lives, and the challenge to us teachers is to help students feel that school is important enough to them that they want to apply those skills there.

Part of SEL is helping students develop the ability to control themselves (see The Best Posts About Helping Students Develop Their Capacity For Self-Control). And previous studies, and a new one, have found that it might be a skill that some in low-income communities might not demonstrate because they just haven’t found it in their self-interest to do so.

Here’s what I wrote about one research paper in 2013:

“…the chain of causality is circular, and poverty is itself responsible for the low self-control that perpetuates poverty….policies that help the poor begin to accumulate assets may be highly effective…”

Now a new study has just come out with similar findings. 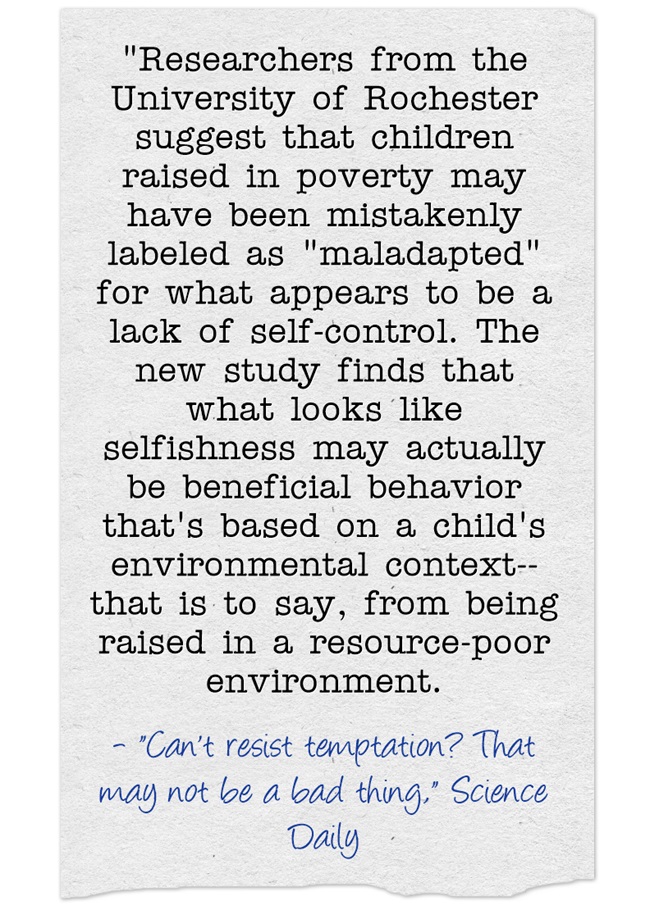 The use of the word “maladapted” seems a bit weird to me just because I’ve never seen that used to describe students who don’t show self-control. But the broader conclusion of the study does make sense, and seems to reinforce the earlier study.

I don’t think it negates the importance of doing whatever we can to support our students to develop more self-control (though let’s not grade them, please).  It does seem to me, though, to possibly alter the lens we use to look at the issue.

More On The Importance Of Sleep For Teens

Video: “Does Using Your Phone Really Hurt Your Sleep?”

No Surprise: Study Finds That If Teachers Show Bias, Then Students Don’t Trust Them Or School

My Best Posts On New Research Studies In 2015 – So Far