“Grit” is all over the news lately, and I’ve previously shared a number of related resources (see The Best Resources For Learning About “Grit”).

In fact, there’s been so much written about it, sometimes it’s difficult to know where to start or who to believe.

But that won’t be a problem anymore because Dan Willingham has clearly written the best (and most accessible) analysis of grit that I have seen – and, believe me, I’ve seen a lot of them! (and this is one day after he gave the best advice you’ll see on students listening to music in the classroom!).

It’s in this summer’s issue of the American Educator under the title of “Grit” Is Trendy, but Can It Be Taught? and it’s freely available online.

He provides an excellent analysis of the research, along with reviewing common critiques. 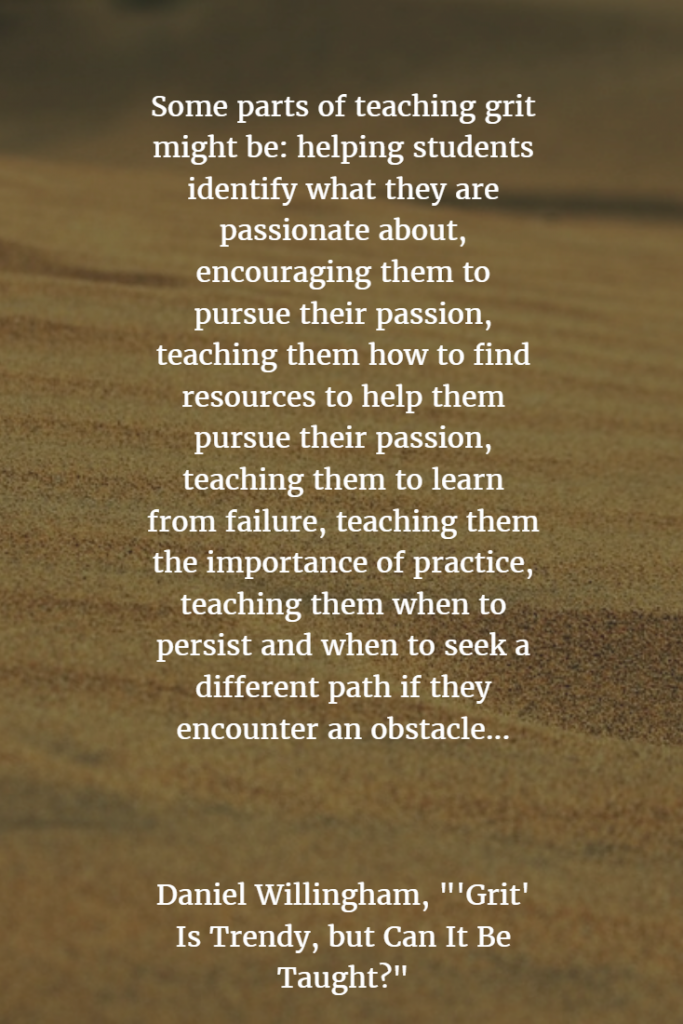 You’ll definitely want to the the whole piece, but I also wanted to share another excerpt that provided an angle on grit that I don’t think you’ll find elsewhere:

Another perspective is that we might want to measure grit not for evaluation but as a way of communicating to students that this characteristic matters. If the ethos of a school includes the ideal of intellectual passion, that individuals ought to find an idea or project or skill they want to pursue for years, despite difficulties or setbacks, because it fascinates them—well, isn’t that grit? And if that’s an intellectual ideal at the school, doesn’t it make sense to check in with students periodically to see if they have found their passion? Note that this is a different role for grit. Now, grit is not a means to an end (such as academic achievement or success in the military) but an end in itself; the hope is that students will find something they love enough to be gritty about.

So go read it — it’s not short, but it’s not going to take you that long to read it, either.

New Study Documents The Benefits To School That Are Obvious To Us, But Maybe Not So Obvious To Our Students

Intriguing, Though Not Conclusive, Study Suggests That Knowledge Gained Through Active Learning Is More Transferable To New Contexts