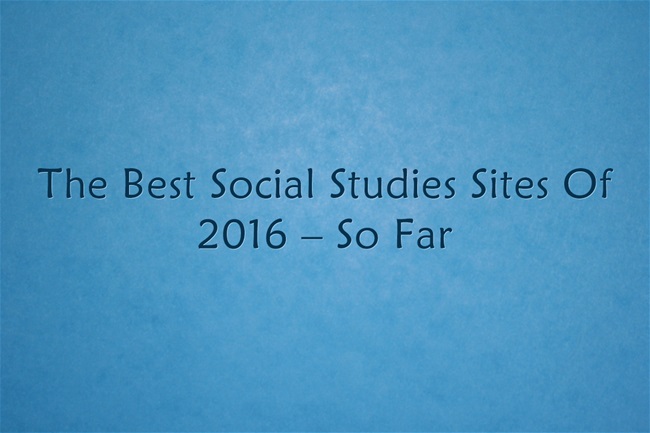 You might also be interested in these previous posts:
The Best Social Studies Sites Of 2015 – Part Two

Here are my choices for The Best Social Studies Sites Of 2016— So Far (the beginning of the list contains links to several related posts I’ve published this year):

Muhammad Ali, R.I.P. – Useful Resources To Teach About His Life

Part 11 – Best Resources For Learning About Flint Water Crisis (this post includes links to all previous editions, too)

Smithsonian’s “Our Story” Is A Valuable Resource For Teachers & Parents

A Collection Of “Best” Lists Related To International Terrorism

The remake of “Roots” premiered, and the History Channel has a good supporting website that includes a visualization of the Transatlantic Slave Trade.

What History Teaches Us About Walls is a good New York Times photo gallery. However, it doesn’t quite deliver what its headline promises. The photo selection is excellent, but the commentary is far more limited than I would liked to have seen. Nevertheless, I’m still adding it to The Best Sites To Learn About Walls That Separate Us.

It appears that the Voice Of America has recently begun creating very short “Explainer” videos about current events.

Blue Feed, Red Feed lets you choose from a number of topics, including the different Presidential candidates, abortion, ISIS, etc. It then shows a side-by-side comparison of what your news feed on Facebook would look like based on how you have interacted with the site. You can read more about it at The Wall Street Journal’s new tool gives a side-by-side look at the Facebook political news filter bubble. It would be useful to use when studying Perception in IB Theory of Knowledge classes.

Metrocosm has created a nice interactive visualizing immigration to the United States over the past two hundred years, including showing countries of origin. Unfortunately, it only shows people who “obtained lawful permanent resident status,” so neither slaves from Africa who were forced to come or undocumented immigrants from other countries are not included. It seems odd that they wouldn’t point out that omission.

Once-or-twice a year, The Washington Post publishes an intriguing collection of maps. You can see links to those previous collections at The Best Websites For Learning & Teaching Geography. Six maps that will make you rethink the world is their latest one.

Chatty Maps visualizes twelve different cities from around the world through sound. That’s right, you don’t actually “hear” the sounds themselves, but they have color-coded and analyzed sounds from most streets in those cities to “map” them. You’ll want to read this description from the Washington Post about it, Fascinating maps reveal what our cities sound like. I’m adding it to The Best “Sound Maps” & Webcams For Teaching Geography, which I’ve also just revised and updated.

Unfiltered News, which only works in Chrome, provides visualizations of the most popular news stories in each country. In addition, you’re provided a list of less popular stories that you can click on to see where they’re being most covered.

Census Names Explorer lets you find when and where a name was popular, or unpopular, over the last one hundred years. It really provides a number of possibilities, including trying to be a detective to identify the reasons for a name’s popularity during a specific era. For example, I discovered that my name, Larry, was extremely popular in the late 1940’s, and I wonder if it had anything to do with The Three Stooges back then? When I explored names like Jose, I found a huge increase over the past thirty years, likely connected to the overall Latino population numbers.

The US News Map is a cool interactive created by The Georgia Tech Research Institute that lets you track specific word usage in historical American newspapers. It’s like a Google Ngram for old newspapers. Slate has an excellent article on it, and how it can be used.

Perspecs is a new free app that gives you three different perspectives on the same news topic: Here are more details:

Perspecs is a new free app that curates the top news stories from a variety of established regional, national and international news sources. Unlike traditional aggregators and news curation services, Perspecs goes a step further and offers readers 3 polarised opinions of the same story.

How these opinions are categorised can vary. For political stories this could be in the form of ‘left’, ‘background’, ‘right’. For review items the categories could be ‘negative’, ‘neutral’, ‘positive’.

The Waypoint, from the Washington Post, is an amazing interactive. It examines the journey of refugees to the Greek island of Lesbos, and is a pretty impressive piece of work. I think it would be an ideal tool to open just about any lesson on refugee crisis.

The British Museum and the Google Cultural Institute have combined to create the online Museum of the World. It’s a cool representation of key artifacts from the museum, grouped thematically and with a timeline. Clicking on the artifact brings you an accessible “box” with added information and audio. Unfortunately for English Language Learners, though, though the audio pretty much says the same thing as the text in the box, it doesn’t exactly repeat it. I’ve found that in a number of online museum sites, and have never understood it — either just repeat what the text says or share some additional new info! Also, unfortunately, there doesn’t seems to be a way that museum “visitors” can “save” certain artifacts into an online collection. Despite these shortcomings, it’s still a neat site….

There are a lot of pretty cool interactives at The Best Sites For Learning About Immigration In The United States. And Vox has just created a new one: Watch how immigration in America has changed since 1820. The title is self-explanatory.

The American Archive of Public Broadcasting is a joint project of the Library of Congress and WGBH in Boston. It has tens of thousands of hours of programming from local public radio and TV stations across the country. It has a few organized sections, including one on the Civil Rights Movement (which includes interviews with major Civil Rights leaders) and also a very friendly search function. I was excited to see it contained several interviews and lectures by Saul Alinsky that I’m looking forward to exploring (see The Best Sites To Learn About Saul Alinsky).It also contains a number of interviews with Cesar Chavez. The sound quality of the shows I’ve listened to are excellent, too.

American Panorama is an “Atlas of U.S. History” from Richmond University. Right now, it has several interactive historical maps tracing historical trends over time, including ones for “forced migration of enslaved people,” “The Overland Trails,” “Canals,” and “Foreign Born Population.” They have plans to add several more. I think the one of “Foreign-Born Population” is particularly useful, and I’m adding a direct link to it to The Best Sites For Learning About Immigration In The United States.

Chronas is a new site that lets you used a time “slider” at the bottom to see how the world looked at pretty much any given date during the past 2000 years. If you click on the countries/regions/empires shown, then it will show you the appropriate Wikipedia entry. It’s still working out its kinks — it wouldn’t let me view it on a mobile device and, even though it says you can view it on browsers other than Chrome – I wouldn’t.