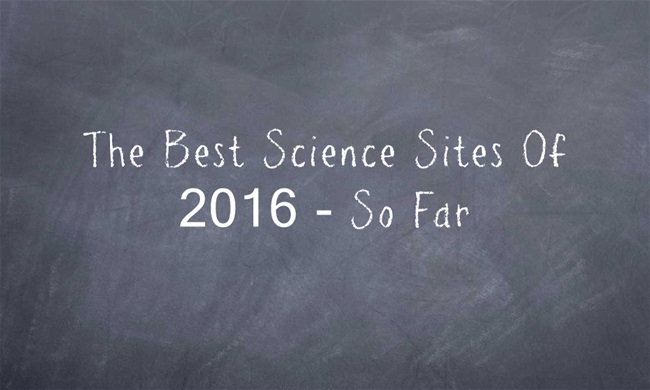 Here are my choices for The Best Science Sites Of 2016 – So Far (not in any order of preference):

Who isn’t going to see “Finding Dory”? So, it’s likely that by the fall, many educators and students will have viewed it at least once, and will be more than eager to see it – or scenes from it – again when it comes out in DVD or streaming a few months later. Disney has published an extensive “Finding Dory” Educator’s Guidethat looks like it could be useful. It’s science-oriented, though I suspect there will be some opportunities to connect Social Emotional Learning to the film, too. And, speaking of Nemo and Dory, Film Education has an equally extensive series of science-based lessons for the original “Finding Nemo,” and Teach With Movies has a broader teaching guide.

bioGraphic is a “new-to-me” site from The California Academy of Sciences. It has great collection of accessible science articles and multimedia, and appears to be regularly updated.

Ice and Sky is an interactive describing the history of climate change. It’s a good complement to A Journey Through Climate History, a site I’ve previously shared.  I’m adding it to The Best Sites To Learn About Climate Change.

Apollo 17 is a multimedia interactive letting you experience – in real time – that moon-landing mission.

Mawahtale is an interactive on Ebola.  I’m adding it to The Best Resources For Learning About The Ebola Virus.

How Much Warmer Was Your City in 2015? is a new NY Times interactive that shows how recent temperatures in over 3,000 cities compare with historical highs. I think it would be a better resource if the differences were displayed a bit more clearer than they are, but students should be able to figure it out with a little teacher guidance.

NBC Learn has created excellent free video resources for quite awhile. Their new resources are series on the Science of Innovation andMysteries of the Brain. But the new one I think will be really be useful is their new ten video collection titled When Nature Strikes: Science of Natural Hazards.

The Online Star Register takes you a virtual tour of outer space. It’s pretty impressive, especially if you click “Take A Tour” at the top. I like it better than Google’s Sky site.

Here are four free online science textbooks which all have lots of interactives that I added to The “All-Time” Best Science Sites this year:

CK-12, which I’ve described in a previous post (see “CK-12” Has Free Resources In All Subjects & Individual Student Progress Can Be Easily Tracked).

Open Educational Resources from UEN, which also has a separate page for online science interactives.

I’m adding this video to The Best Sites To Learn About Trees, which I’ve also just revised and updated:

Lines Of Thought: Discoveries That Changed The World is a new online exhibit from the Cambridge University Library. You can read more about it at the NBC News article, 600-Year-Old Cambridge Library Offers Rare Glimpse of Collection, and watch a short video about it below:

I’m adding this info to The Best “Lists Of Lists” Of History’s Most Influential People, Events & Ideas.

I’m adding this video to The Best Sites For Learning About Human Evolution, which I’ve also just updated and revised:

When we study science in IB Theory of Knowledge, one of the ideas we consider is that not all scientific breakthroughs come through rigidly following the scientific method. NPR recently did a short series of videos examining just this: “modern examples of serendipity in science – happy accidents/mistakes/coincidences from the last few years that have led to discoveries and insights.” They’ll be useful in TOK class, and here they are:

Fig. 1 by University of California is a YouTube Channel offering short, accessible science animations with closed-captioning. Here are some samples:

The Best Education Articles From “The Onion”