A Look Back: How To Recover From A Classroom Train Wreck…. I wouldn’t want to teach at any other school than where I’m teaching now, and I think the same goes for the vast majority of our faculty. And I think the same percentage of our students wouldn’t want to be attending any other school either. Since we’re in Program Improvement, every year we need to provide forms to our students where they and their families can request an assignment to another school, and typically students look at me like I’m a bit crazy and many say something like, “Why would I want to go somewhere else?”

That being said, as the biggest inner-city school in Sacramento, we are not immune from the challenges facing our students, their families, and our neighborhood. They sometimes get brought to the surface by the pressures of holidays, and that was certainly the case this week.

Most of our counselors, administrators, and school monitors have been busy the past few days dealing with dispute resolutions. We’ve had a number of fights, and lunch was cut short one day in an effort to head-off the potential of escalating violence.

On that particular day when things were tough school-wide, student behavior in one of my “double-block” classes was the worst it’s ever been (it had been moving in that direction during the previous days). In retrospect, I should have quickly given up on my lesson plan and moved the class into a game, but I kept on believing I could recover.

The next day, students came into class to a new seating chart and my announcement of a “points system” (you can see a more detailed explanation of how this works at Have You Ever Taught A Class That Got “Out Of Control”? and an even more detailed description in one of my books.

I told students why I was instituting it and how it would work, and also told them that any student who earns the full amount of points five days in a row would then be taken off of it and receive the points automatically. I said that I assumed most, if not all of them, would be off the system in a week.

You might be thinking, “Wait, you’re the intrinsic motivation guy. What are you doing with a points system?”

As I’ve said before in this blog and in my books, community organizers (and I) operate in the world “as it is,” not the world “as I would like it to be.” As long as extrinsic motivation is used in a very limited and temporary way, and there is a clear exit strategy, I think it’s fine to use it.

My students responded very, very positively to the change, and I’m sure in a few days we’ll be back to normal.

But I also want to mention one other element that I believe is a key to why it’s worked so well.

The same day I instituted the points system — the arm of discipline — during the twenty minutes of silent reading time that starts each class I had short private conversations with each student. In those conversations, I “touched” on each of my students’ individual self-interests (which I know because of the relationships I have built with them). I told one student that I had gotten a book I had known he wanted to read; another the positive things I planned to tell his mother at an upcoming parent conference; another that I would like him to start being the leader in his student small group, etc.

We teachers are human — it’s understandable that sometimes when students act so inappropriately, we want to come down on them like a ton of bricks.

But an “iron fist” won’t do the job of creating a community of responsible learners, though it might temporarily create a classroom of somewhat compliant bodies. 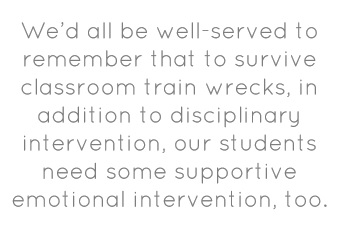 A Look Back: I Have Tried To Help Students Facing Challenges With This Goal Sheet & Have Had A Little Success