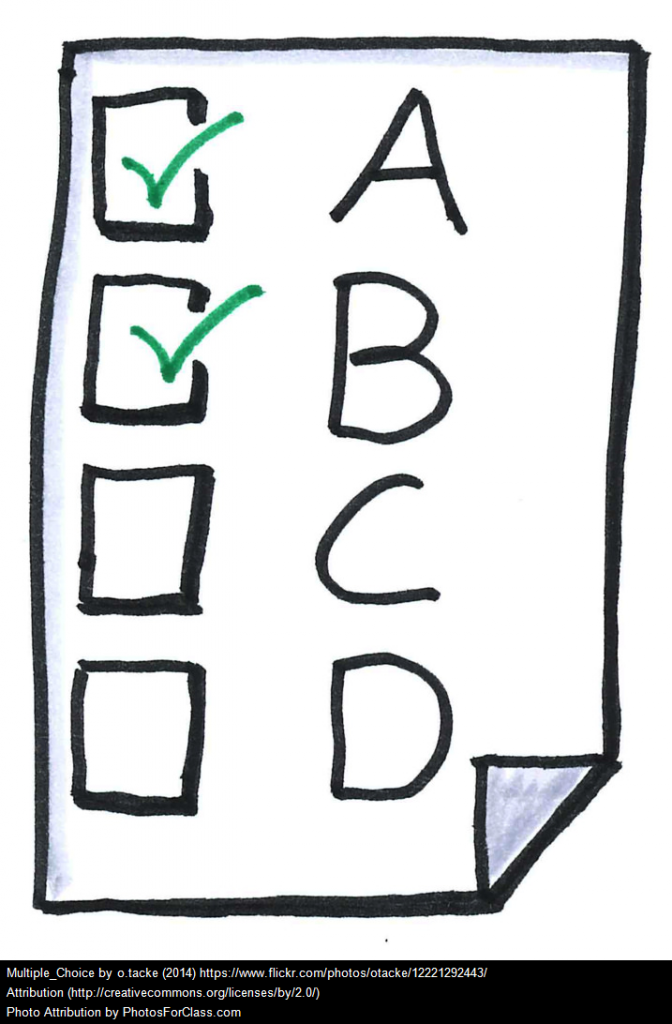 Earlier this year, I published a post on ways to use multiple choice tests.

Today, Paul Bruno shared this new article on the topic:

They are useful actually.//A Defense of the Multiple-Choice Exam https://t.co/yHUsR2lkWy

I prompted me to think it would be useful to reprint my earlier post and turn it into a “Best” list. Feel free to share your own ideas:

I often experiment with how to use multiple choice exercises in creative and effective ways.

One reason is because periodicaly create ones for English Language Learners at the New York Times Learning Network.

Another is because I sometimes have students create ones for their classmates.

David Deubelbeiss has what I think is a great idea on how to make multiple choice questions more learner-friendly and effective.

And Jason Renshaw has come up with other ways.

A conversation about this very topic arose on Twitter this morning, and I thought I’d share a few, though not all, of the related tweets, and also invite readers to share their own ideas in the comments section:

Poor multiple-choice questions are a horror; great ones are tremendous. @Maths_Master on @naveenfrizvi’s ideas https://t.co/DLrxVYRex9

I’ve never gotten why some people object so strongly to MC questions. Unfairly villainized in my view. https://t.co/T0D78ny7QH

Excellent multiple choice questions can contain more than one correct answer, an idea I learned from @ddeubel https://t.co/zTtr3YxlkY

@Larryferlazzo @ddeubel I love using the phrase “Choose all that are correct.” No longer a guessing game to find “the one.”

@Curiosity_Films I advocate for “this is unfamiliar to me” as a choice on all items if MC test is a pre-assessment. @Larryferlazzo @ddeubel

@palan57 @Larryferlazzo @ddeubel If we’re talking formative quiz, I see no problem. If this is summative, we should design better assessment

Multiple-choice Testing: Are the Best Practices for Assessment Also Good for Learning? is from The Learning Scientists.

I think you can make a pretty good case that many real-life situations are in fact substantially similar to multiple-choice questions.

A review of the research on how to write good multiple choice questions. https://t.co/DCUIadbhSR pic.twitter.com/OB1gkTX8oC

Writing A Better Multiple-Choice Question: What Does Research Indicate? is from The Effortful Educator.

Differentiation and multiple choice questions is from Mssdcoxblog.