A Look Back: “A Surprising Study Only To People Who Have Never Worked In The Community: Low-Income People Care About Their Neighborhoods” 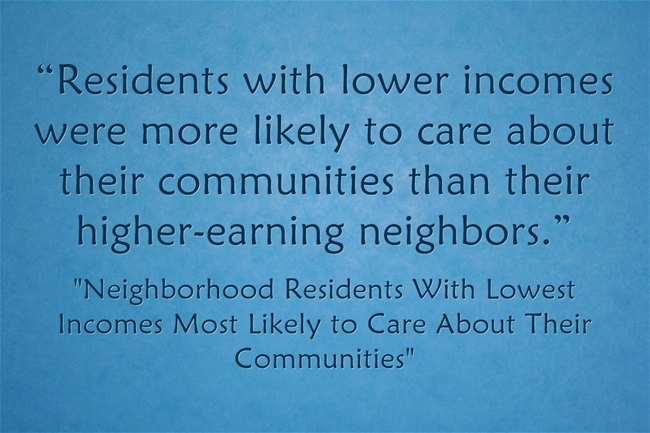 Neighborhood Residents With Lowest Incomes Most Likely to Care About Their Communities is the title of an article summarizing a new research study:

“We hypothesized that individuals with higher incomes would have higher levels of community care and vigilance, but the opposite was true,” Yu said. “Residents with lower incomes were more likely to care about their communities than their higher-earning neighbors.”

Yu said he and his colleagues were somewhat surprised by the findings that lower-income residents cared more about their communities.

These guys — and others — have to get out more…

My students demonstrate this each year when we do one of my favorite lessons — they research (including doing walking tours) of our school’s neighborhood and the wealthiest neighborhood in Sacramento. Almost all of them end up writing a persuasive essay concluding that their neighborhood is better. You can read about it in one of my books and in this blog post, A Lesson Highlighting Community Assets — Not Deficits.

A Look Back: I Created My Own News Aggregator With AllTop – You Can Use Mine Or Create Your Own