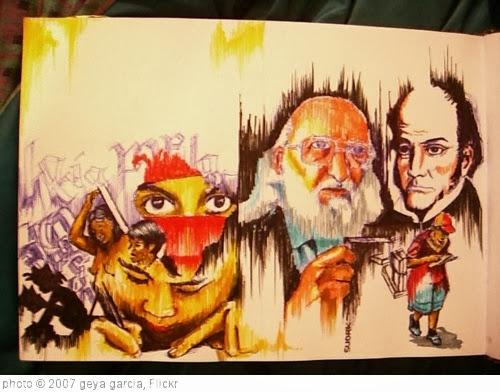 I’ve written several times about how I use critical pedagogy with English Language Learners, specifically using a Freirian model (see “Freire’s Learning Sequence” from this blog and a New York Times piece I wrote).

In addition, I’ve often written about how I use the Fotobabble tool, which lets you post an image and provide a thirty second narration with it (see Student Writing & Metacognition).

Well, our student teachers and I put the two together this week with our Beginning English Language Learners.

Johnny Doolittle, an art teacher at our school, regularly uses his prep (free) period to help our ELLs, and this week did an art project with them. Along with creating art, our student teachers thought it would be a good time to use some Diego Rivera artwork in the context of a critical pedagogy lesson.

Students followed this sequence with the art:

1. Show a picture or short video clip portraying a national or international problem, or a common challenge your students face.

2. Next, ask students to share what they believe is happening. What is the problem they think is being portrayed?

3. Ask students what they think caused the problem.

4. This is followed by asking students if they, members of their family, or friends have ever experienced a similar problem.

5. Next, students can share how they responded to the problem.

6. The final task is to ask them to talk about other ideas they might have about how to respond to the problem, potentially bringing everything together in a poster to share.

This is where Fotobabble came in — we then took a picture of students with their “storyboarded” answers, and recorded their narration.

It worked pretty well. Here are a couple of example:

Also, students showed the art they created with Mr. Doolittle, and described the steps they took to create it:

A Look Back: “Home Visits and Hope for the Future”