The Best Videos For Educators In 2016 – Part Two 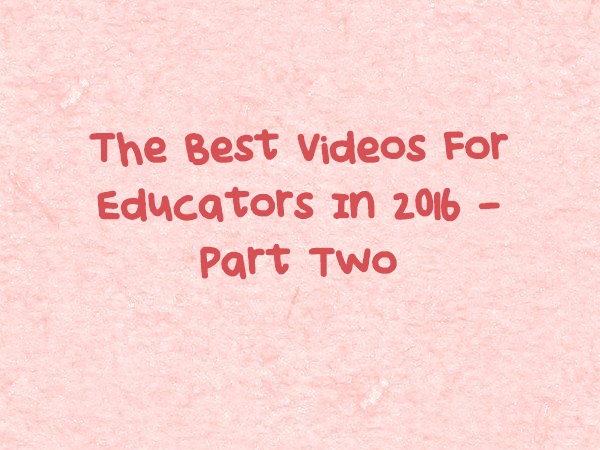 Another day, another end-of-the-year annual “Best” list (you can find all 1,600 Best lists here).

The Best Videos For Educators In 2015 – Part Two

Here are my choices for The Best Videos For Educators In 2016 – Part Two (some may have been produced prior to this year, but are just new to me):

In this video, sponsored by Bill Gates, “The 71 Most AMAZING Innovations of All Time” are described chronologically.

I’m adding it to The Best Websites For Teaching & Learning About World History and to The Best Sites Where Students Can Learn About Inventions.

Here’s a new video from the American Museum of Natural History that I’m adding to The Best Websites For Teaching & Learning About World History:

I’m adding this video to The Best Sites For Learning About Immigration In The United States (which I just completely revised and updated):

I’m adding this video to The Best Sites For Learning About World Refugee Day:

I’ve previously posted many pieces about StoryCorps, including their exceptional video animations.

Recently, they began a joint project with Upworthy to create a series of animated videos called #WhoWeAre, “a campaign to share the stories of every Americans, build compassion, and offer hope to a divided nation.:

You can see all of them here.

They’re short and very visually engaging. Here are a couple of their most recent ones:

Raising Barriers is a three-part interactive video series from the Washington Post that’s appearing this week.

It examines the rise of border fences and walls throughout the world.

I’m adding it to The Best Sites To Learn About Walls That Separate Us.

Vox shared this terrible video of the destruction in Aleppo.

I’m adding it to The Best Resources For Learning About What’s Happening In Syria.

Today, through the White House Initiative on Educational Excellence for African Americans , I learned about this video created by students at a KIPP school in Oakland.

It includes all the information that TED-Ed left out of theirs:

I’m adding this video to The Best Resources For Learning About School Desegregation (& Segregation) – Help Me Find More:

You might also be interested in the multi-part series I published about the Flint crisis. You can find links to all my eleven related “Best” lists at Part 11 – Best Resources For Learning About Flint Water Crisis.

President Obama spoke at opening of The Smithsonian National Museum of African American History & Culture. You can read more about it at this Washington Post article, African American Museum opening: ‘This place is more than a building. It is a dream come true.’

I’ve embedded the video of his speech (he begins at the nine minute mark) below. Here’s the transcript.

He talks a lot at the beginning about the importance of story-telling and what he says meshes very well with Chimamanda Ngozi Adichie’s popular TED Talk, “The Danger Of A Single Story.” Many teachers use it in the classroom now, and I think portions of the President’s speech would be an excellent addition to those lessons.

You can find more info on that idea in two previous posts:

“the danger of not having your own stories”

Useful TED-Ed Lesson On “The Danger of a Single Story”

I’ve added this info and video to The Best Resources On The Smithsonian’s African-American Museum.

It was much, much better than their last one, though that one was so bad they couldn’t really go anywhere but up (see Complete Unedited Versions Of Last Night’s TED Talks On Education (Including Bill Gates & His $5 Billion Boondoggle).

The real surprise to me was the section beginning from twenty-two minutes in and ending at about the thirty-second minute. Victor Rios, who I’m embarrassed to say I had never heard of prior to the show (you can learn more about him at this PBS News Hour segment from a few years ago, One Man’s Journey From Gang Member to Academia), gave a must-watch talk on grit and resilience – with a very different perspective than those who say “Let them eat character” (see The manipulation of Social Emotional Learning).  His talk was followed by an excellent short film on undocumented students in Georgia who want to attend college.

Here are a couple of excerpts from his talk: 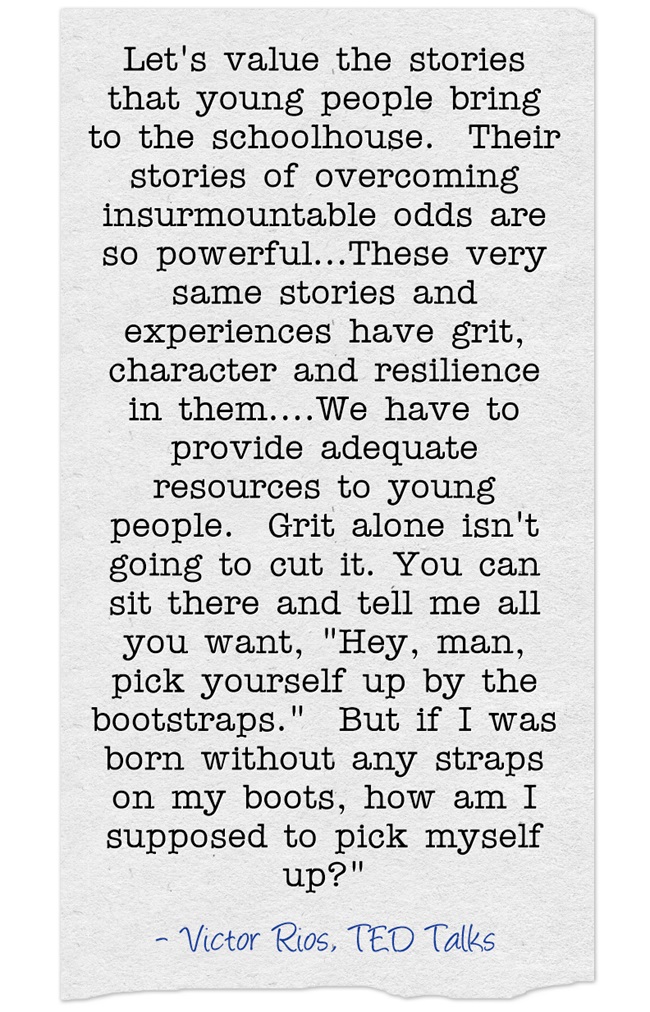 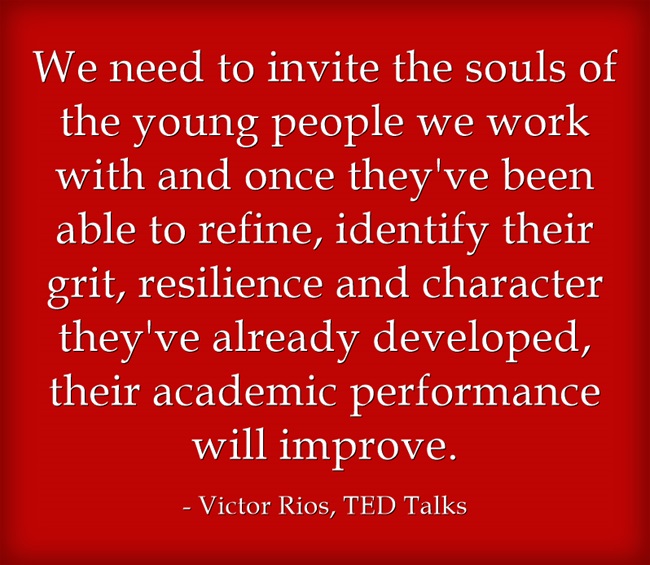 Here is the entire video (which may, or may, show up in an RSS Readers0:

I’m adding this info and video to The Best Resources For Learning About The Importance Of “Grit.”

KQED Mindshift hosted a Facebook Live session with me in August on “10 Strategies to Help Students Develop Intrinsic Motivation to Write.”

I’ve embedded the forty-minute video below. It seemed to go well and received quite a few positive comments. I kept it very practical. Feedback is welcome!

I’m adding this to The Best Posts on Writing Instruction.

This is a fun video – I hope all our students were as excited as he was to start a new school year!

You can read more about it at TIME Magazine.  Thanks. to Jonas Chartock for sharing it on Twitter.

This is a great video for Geography classes, BUT I wish the narrator didn’t talk so fast!

Here’s an intriguing new video segment from the PBS News Hour (you can read the transcript here):

I’m adding this next video to The Best Posts On Books: Why They’re Important & How To Help Students Select, Read, Write & Discuss Them.

I’m adding it to The Best Websites To Learn About Various Religions (& English), which I’ve just completely revised and updated.

I gave a presentation to the California Teachers Summit at California State University in Sacramento. Here, I’ve added audio to my PowerPoint presentation.

My talk will eventually be posted at the California Teachers Summit YouTube Channel but I don’t know when that’s going to happen, and I’m also not sure if the video will just be me talking or if it will including the slides, too.

So, I figured getting it out this way would be most useful to teachers, particularly as we all are planning for the upcoming school year.

Any and all feedback is welcome!

Many of us have students who have fled gang violence in El Salvador and, unfortunately, some of them may very well be deported back there.

Here’s a new fascinating video about what some teens do there in an attempt to help the community and escape the violence:

Here is an incredible video for the Rio Paralympics.

The Telegraph newspaper publishes a series of “Explained – In 60 Seconds” videos about current events (though they sometimes also include coverage of more “gossipy” topics).

Unfortunately, they don’t have a central place on their website where you can access them all in one place.

However, they do have a YouTube playlist that appears to be about three weeks behind in publishing their newest ones.

You can also search “Explained – in 60 Seconds” on their website.

I’m adding it to The Best Online “Explainer” Tools For Current Events.

I have several videos on The Best Resources For Helping Teachers Use Bloom’s Taxonomy In The Classroom list that are of the “Bloom’s Taxonomy According to _______” genre (The Simpsons, Star Wars, etc.).

Here’s a new one using the Disney movie, Monsters Inc. (it’s not as good as some of the others, but still useful):

I learned about this video from Vox, and I’m adding it to The Best Websites For Teaching & Learning About World History:

“Awkward Family Photos” Is A Great Source Of ELL Materials