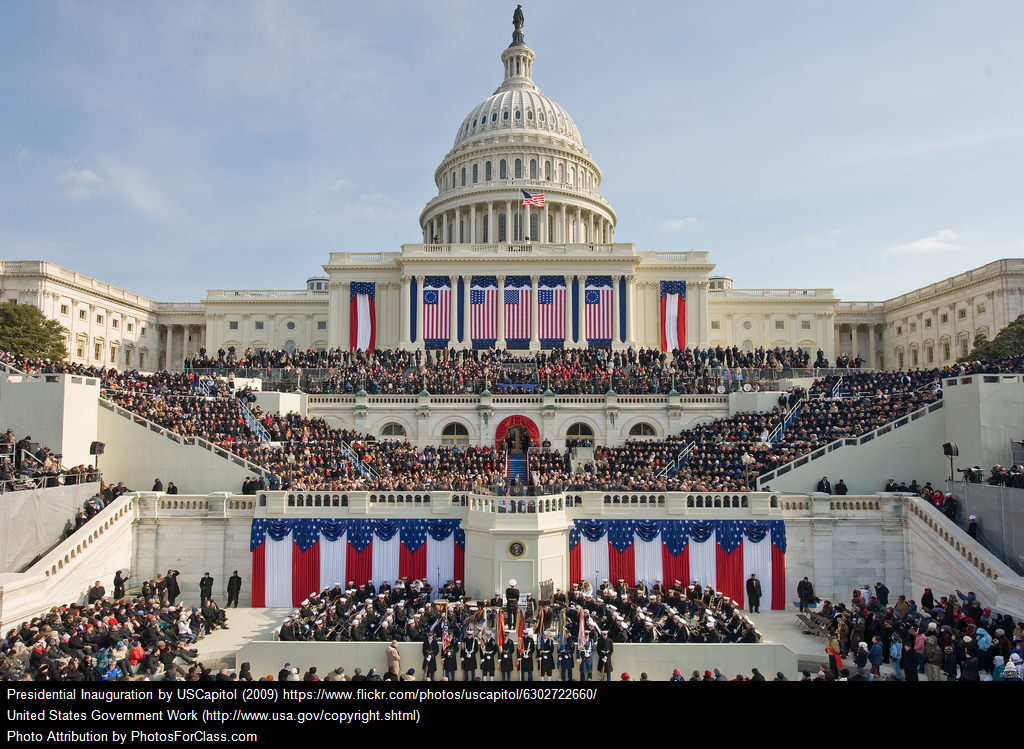 Donald Trump will take the oath of office on January 20, 2017 and become the 45th President of the United States.

It’s an opportunity for learning about how the U.S. government works and for critical thinking about what it means to be an “active citizen” in the United States (see my NY Times posts, “Ideas For E.L.L.s: Civics and Citizenship and “Ideas For English Language Learner: What Does It Mean To Be A Citizen?, as well as my Washington Post piece, ‘Dear President-elect Trump’: Immigrant students write letters asking for ‘the opportunity to demonstrate we are good people.’).

I’m eager to hear from teachers about how they will be approaching the inauguration in their classrooms – if at all.

You might also be interested in these previous “Best” lists, which provide lots of additional resources for potential government and critical thinking lessons:

The Best Sites For Learning About The Presidential Inauguration – 2009

The Best Sites For Learning About President Obama’s Second Inauguration

The Best Sites To Learn About U.S. Presidents

Here are my choices for The Best Sites For Learning About The Presidential Inauguration – 2016:

Trump Inauguration Security Planners Brace for Wave of Protesters is from The New York Times.

National Geographic has a good article and slideshow about the history inaugurations.

Inaugural Words from The New York Times, I believe, is one of the more useful resources that were been created for President Obama’s first  Inauguration (it’s still “live,” but I don’t believe it’s been updated).  “Word clouds” highlighting the most-used words in each inaugural address in history can be seen. In addition, words that were used in each address much more than in the other ones given in history are identified. Plus, by clicking on each word you are shown how it was used in a sentence. Comparing the words and even just using them as a vocabulary-building exercise for English Language Learners make this an excellent resource.

Inaugural Firsts is a slideshow from National Public Radio.

The Wall Street Journal has a multimedia feature highlighting inaugurations since 1960, including providing both the audio and text of the speeches, along with “word clouds.”

From drunken speeches to dead canaries, a guide to our quirky inaugural history is from MSNBC.

Protesters’ Plans Present Challenges for Inauguration Security is from Voice of America.

Countdown to January 20 is from Teaching Tolerance.

Why Dozens of Congress Members Are Boycotting Trump’s Inauguration is from Rolling Stone.

Why Some Democrats in Congress Refuse to Attend Trump’s Inauguration is from The Atlantic.

The Women’s March on Washington has spread to 57 countries around the globe is from Vox.

The Inauguration of a New President: A Lesson Plan on Predicting and Evaluating the First 100 Days of a Trump White House is from The New York Times Learning Network.

Photos of the Inauguration of President Donald J. Trump is from The Atlantic.

How Trump’s inaugural address compares to his predecessors, charted is from The Washington Post.

How Trump’s inaugural speech differed from past presidential addresses is from The Washington Post.

An initial estimate put the crowd for Trump’s inauguration at about one-third the size of Obama’s ’09 crowd https://t.co/bizNr643SE

Protests, sit-ins at schools in CA for @realDonaldTrump inauguration https://t.co/dtTxToR1EO by @EdSource pic.twitter.com/2cbuhGDjRj

Where Women’s Marches Are Happening Around the World is a NY Times interactive.

How the world reacted to Trump’s inauguration as US president is from The Guardian.