A new study has been released saying that having a positive relationship in the fifth-grade with a teacher can have a long-lasting effect on student behavior in future grades.

Positive teacher-student relationships boost good behavior in teenagers for up to 4 years is the headline of a Eureka Report summary of the Swiss study. 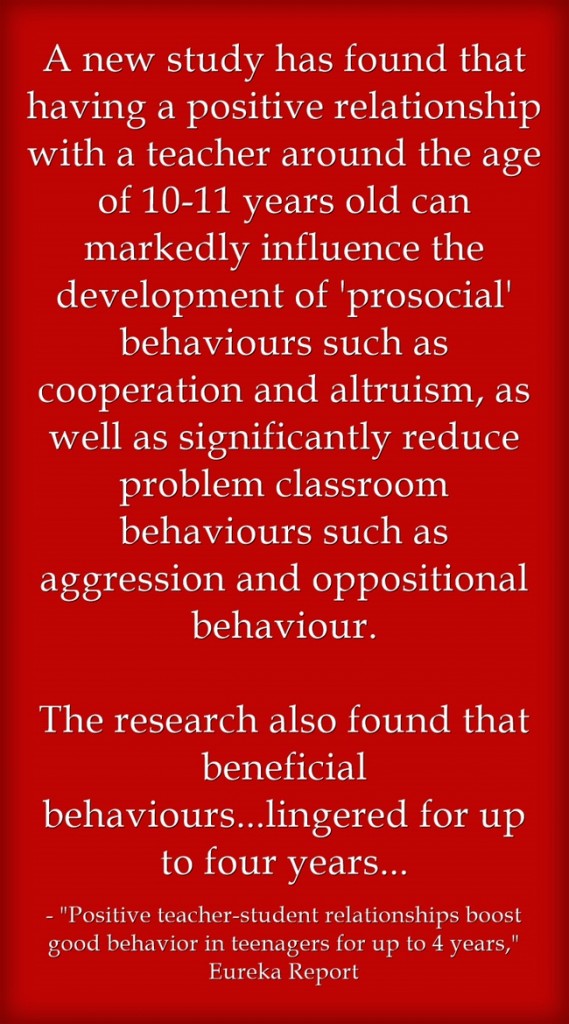 Obviously, student-teacher relationships are important in all grades (see The Best Resources On The Importance Of Building Positive Relationships With Students). I do think it’s interesting, though, that the researchers emphasize fifth-grade.

When I was exploring entering the teacher profession, I did a very unofficial survey of about fifty people I knew, asking them what grade during their school career was most memorable and important to them. Fifth grade was the overwhelming response. Those results moved me to prepare to teach that level, though Burbank High School, where I continue to teach now, made me an offer I couldn’t refuse – to teach classes of pre-literate Hmong refugees who had never been in school before. I’ve never regretted my decision.

I didn’t read the actual Swiss study – only the summary. But I do wonder how they ended up focusing on that age group. Could those relationships in other grades result in similar or even great long-term impacts?

It reminded me of the often-quoted finding that third-grade is the key one for reading ability. Other studies have found that there may not be anything really magical about that age for literacy (see Really Interesting Perspective On Study Claiming Third Grade is Pivotal for Readers).

A Look Back: New Study Finds That Using Cellphones During Lectures Hurt Exam Scores, But That’s Not The Most Important Result

A Look Back: New Study Finds That Thinking We Might Know Something, But Then Discovering We Don’t, Is Most Motivating Type Of Curiosity