Immigration Raids Across The Country – Is This Just The Beginning? (If It Is, Here Are Helpful Resources) 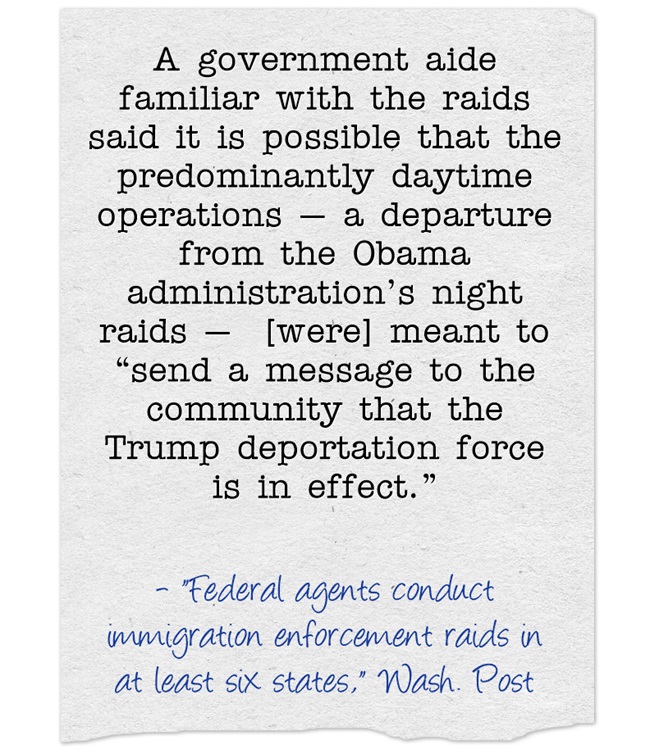 ICE made raids in immigrant communities across the country this week and, in a major difference from the past, arrested undocumented residents without criminal records.

There is going to be a lot of fear in classrooms across the country next week.

Here are some articles about the raids, followed by useful resources to potentially share with students (or, at least, portions of them). I know my English Language Learners have been talking about doing a community project to share information in their communities about the legal rights of residents.

I’ll be adding this post to The Best Resources For Learning About President Trump’s Executive Orders On Immigration & Refugees.

First, here are some articles about the raids:

Federal agents conduct immigration enforcement raids in at least six states is from The Washington Post.

Reports of Raids Have Immigrants Bracing for Enforcement Surge is from The NY Times.

Of course, this comes on the heels of the deportation this week of a widely-reported deportation of a an Arizona mother who had lived in the U.S. for decades:

Guadalupe García de Rayos is no “bad dude,” but she was deported anyway https://t.co/RvzqcUmQJK pic.twitter.com/jRKBZyPSjI

Here are some resources (again, you might just want to share portions) that could be helpful to students and their families:

Know your rights. Remain calm. is from the ACLU.

What immigrant advocates want you to do if ICE agents come to your door is from CNN.

Immigrant and Refugee Children: A Guide for Educators and School Support Staff is from Teaching Tolerance.